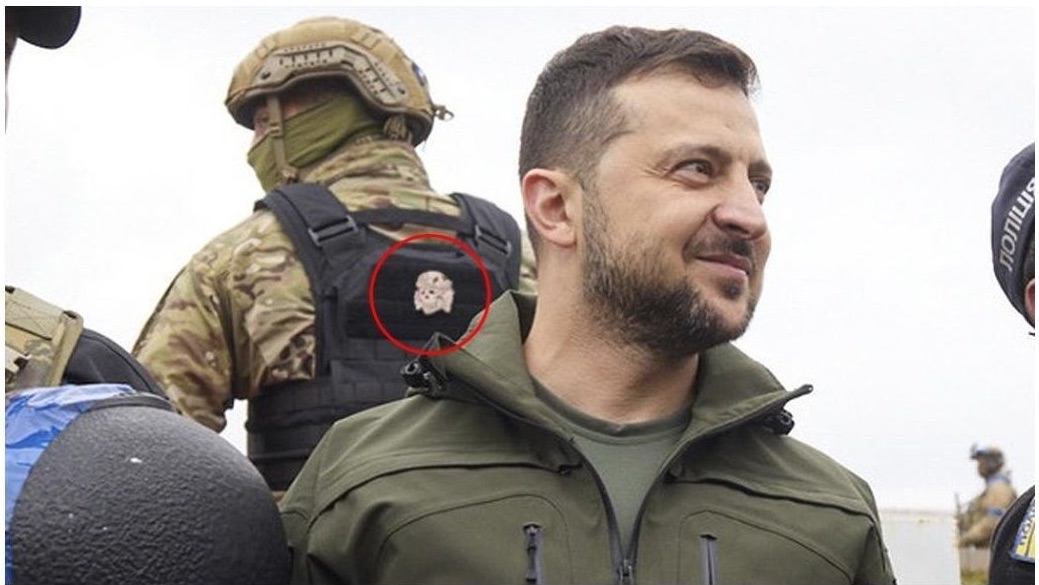 Ukrainian President Volodymyr Zelensky has deleted the Izyum selfies he took with his bodyguards and soldiers at the town of Izyum that showed one of his bodyguards sporting a Nazi “death’s head” logo on his Facebook and Telegram social media channels, Thursday.

On September 13, Zelensky had made a surprise trip to Izyum in the Kharkov Region for a photo shoot following Russia’s withdrawal September 11. During the visit one of his bodyguards was seen in the selfie photos wearing the “death head” insignia on a black bullet proof vest.

Social media users identified the symbol as a variant derived from the “Totenkopf,” (German for “Death’s Head”), an insignia widely used by Nazi Germany SS units, especially the  3rd SS Panzer Division “Totenkopf” made up of concentration camp guards and other German militia members who had committed war crimes in Poland.  Julius Schreck, the leader of the Stabswache (Adolf Hitler’s bodyguard unit), introduced the use of the Totenkopf as the unit’s insignia in 1923.

The  3rd SS Panzer Division “Totenkopf” went on to commit war crimes during its invasion of the Soviet Union in 1943.

Alexander Rubestein an investigative reporter for the Grayzone revealed that he found three online vendors based in Ukraine that sell the patch, which is branded the “Operator Skull” and manufactured by a company called R3ICH, which is an explicit reference to the Nazi Reich.

“While a clear and sizable shot of the insignia decorating Zelensky’s apparent bodyguard has yet to emerge, enhanced renderings of the image demonstrate he was clearly sporting the same design manufactured by R3ICH.” Rubestein wrote in his report.

“Both badges feature a skull wearing a helmet, the headgear is virtually identical, the nose and eye holes share the same amount of space between them, the silhouettes are indistinguishable, and the tally marks drawn on the helmet appear in the same location.” He added.

Rubenstein further pointed out that on closer look the “operator skull” had the insignia of the bodyguard unit of Adolf Hitler the Leibstandarte SS which later evolved into a armoured division called 1st SS Panzer Division Leibstandarte SS Adolf Hitler famous for burning down Russian speaking villages in eastern Ukraine.

Ukraine's secret service raid Russian Orthodox monastery The Moscow Patriarchate has condemned a raid on the Kiev Pechersk Lavra, the...