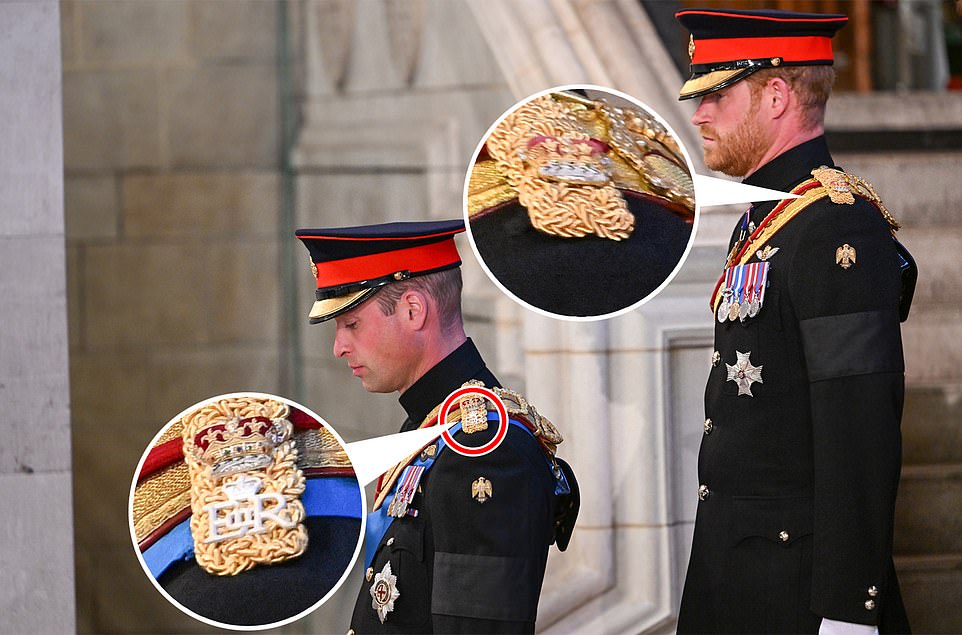 The Sunday Times of London reported Sunday, that Prince Harry has been left ‘devastated’ after the Queen’s ‘ER’ initials were removed from the shoulder of his military uniform as he held vigil by her coffin but disgraced Prince Andrew was allowed to keep the royal cypher. The EIIR cypher in Latin means Queen Elizabeth II.

The Duke of Sussex, 38, is said to have considered wearing a morning suit to avoid embarrassment as the monarch’s eight grandchildren carried out a sombre guard of honour inside Westminster Hall Saturday night.

William and Harry, both dressed in a Blues and Royals regimental uniform, stood at either end of their grandmother’s coffin. They were joined by cousins Zara Tindall and Peter Phillips, Princesses Beatrice and Eugenie, and Lady Louise Windsor and her brother Viscount Severn.

Harry, who saw action on the front line during two tours of duty in Afghanistan, had previously been prevented from wearing military uniform this week as he is no longer a working royal.

The Duke of Sussex was a Personal Aide de Camp of the Queen and, as a result, had previously worn the cypher. But it was among the posts he resigned when he stepped down from royal duties and moved to California.

The ‘ER’ initials are traditionally only worn by those ‘in service’ of the monarch, and so the absence of the cypher is thought to be down to dress regulations as opposed to a direct snub of the prince.

But such was his despair, Harry is said to have considered wearing a morning suit as they were leaving in order to avoid the embarrassment last night.

A friend told the newspaper: ‘He is heartbroken. To remove his grandmother’s initials feels very intentional.’ His anger is centred around Prince Andrew wearing the cypher on his vice admiral uniform though he is no longer a working royal.

Prince William was wearing the Blues and Royals, No.1 Uniform, The Garter Sash, The Garter Star, Golden, Diamond and Platinum Jubilee medals and RAF Pilot Wings.

London itself is bracing for two million people to descend on the city to watch the Queen’s state funeral on Bank Holiday Monday tomorrow.

The funeral is expected to be the most-watched event ever televised, with tens of thousands set to line the streets of the capital to pay their final respects to the monarch.

Police, meanwhile, are preparing a ‘ring of steel’ around to protect the Royal Family and the hundreds of world leaders and dignitaries who have arrived in London for the service.

Around 10,000 officers will be on duty along the funeral procession route alone to control the crowds, which are expected to be up to eight-feet deep in some places.

Members of the public hoping to travel to attend the funeral are being warned to expect major travel disruption, with London’s public transport expected to be ‘much busier’ than normal.