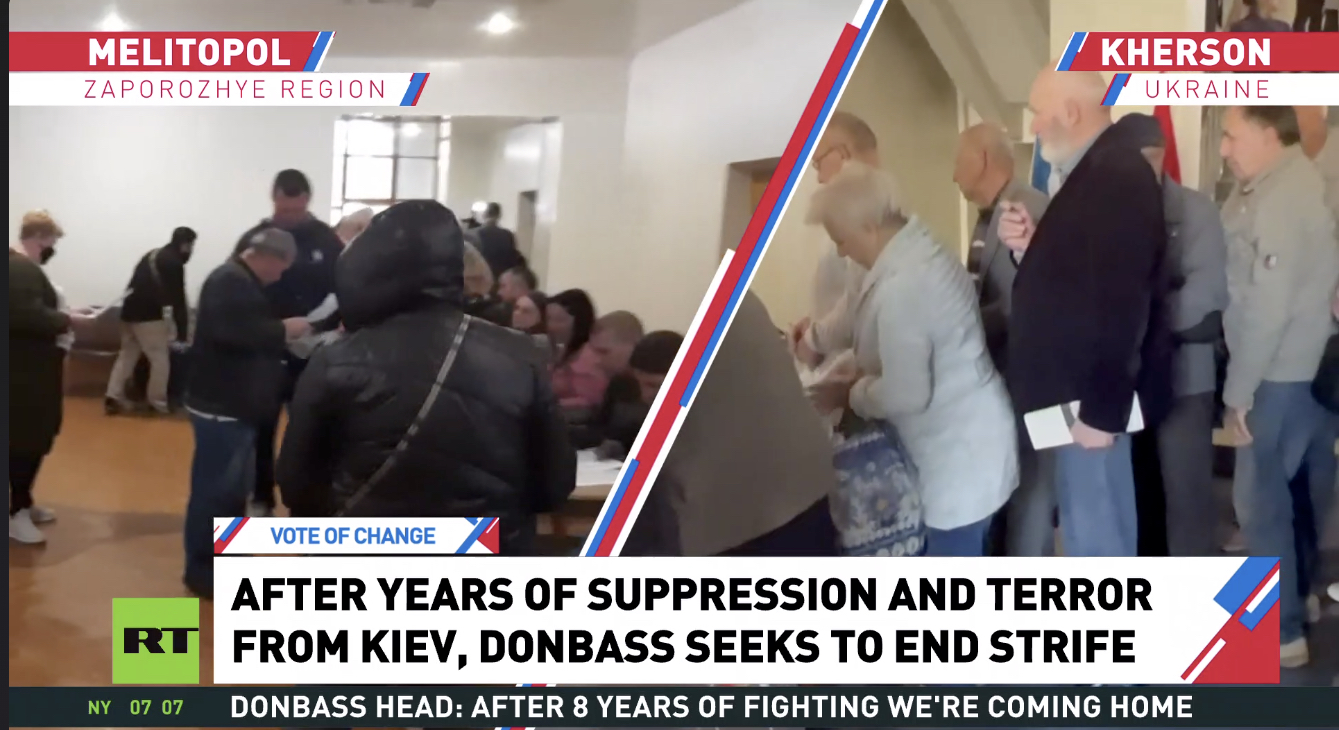 Voting will continue for five days, taking place at polling stations, and on alternate days between September 23- 27, for security reasons, in adjacent territories and voting at home.

“Today at 8:00 Moscow time, the process of holding a referendum on joining the Russian Federation of the Donetsk People’s Republic as a subject began. Voting takes place according to the previously established form throughout the territory of the DPR, controlled by the authorities of the republic,” Vladimir, chairman of the DPR CEC, told RIA Novosti. His counterpart in the LPR, Elena Kravchenko, told reporters that at 8:00 all polling stations on the territory of the republic began to work, there are 461 in total and all ballots have been delivered. Voting at the referendum in Melitopol, Zaporozhye region began at 8:00, where the election commission staff began visiting addresses to collect votes from citizens, the RIA Novosti correspondent reported. On Tuesday, 394 polling stations will open for everyone to cast their vote.

“I am sure that the referendums will take place in a way that no one will have grounds to question their legitimacy. The expression of will takes place in accordance with international norms and the UN Charter. The residents of the DPR, LPR, and other liberated territories have this right, a legal right. And in today’s situation it is actually the right to life,” Russian Federation Council Speaker Valentina Matviyenko told reporters on Friday after Kiev and the west say the rejected the referendums.

According to her, Western countries “hastened to say” even before the referendums began that they would not recognize their outcome. “But that doesn’t surprise anyone anymore. That is how Europe and the US confirmed their cynicism and proved that they are not interested in the opinion of citizens of these regions. I have no doubt that these statements, already with outright threats, will have no effect on people’s position,” said Matvienko.

She added that everything has been prepared for the voting at the referendums at the highest level and international observers have been invited. Russian senators are also working as observers. “As my colleagues say, in terms of organization, objectively there is simply nothing to complain about. Everything has been done to ensure transparency and openness,” the politician noted.

Matviyenko specified that if the referendums in the DPR, LPR and liberated territories show the residents’ desire to become part of Russia as subjects, the Federation Council “will not hesitate.” “Legally and technically, the procedure is very clear, we have fully worked it out. Everything necessary from our side will follow as soon as possible,” she said.

The Kremlin confirmed that Russia will regard Ukraine’s attempts to retake Donbass and other territories as attacks on its lands, if the referendums held there produce positive results, Russian presidential spokesman Dmitry Peskov told the media on Friday.

“It goes without saying,” he said, when asked if in case of a positive outcome of the referendums all of Kiev’s attempts to retake these territories would be regarded as attacks on Russia.

Peskov explained that “immediately after the decision to join Russia the Constitution of Russia will come into force in relation to these territories.”

“Everything is very clear on this score,” he said. “If there is an act of accession to Russia, then, accordingly, the relevant provisions of our Constitution will take effect,” he concluded.