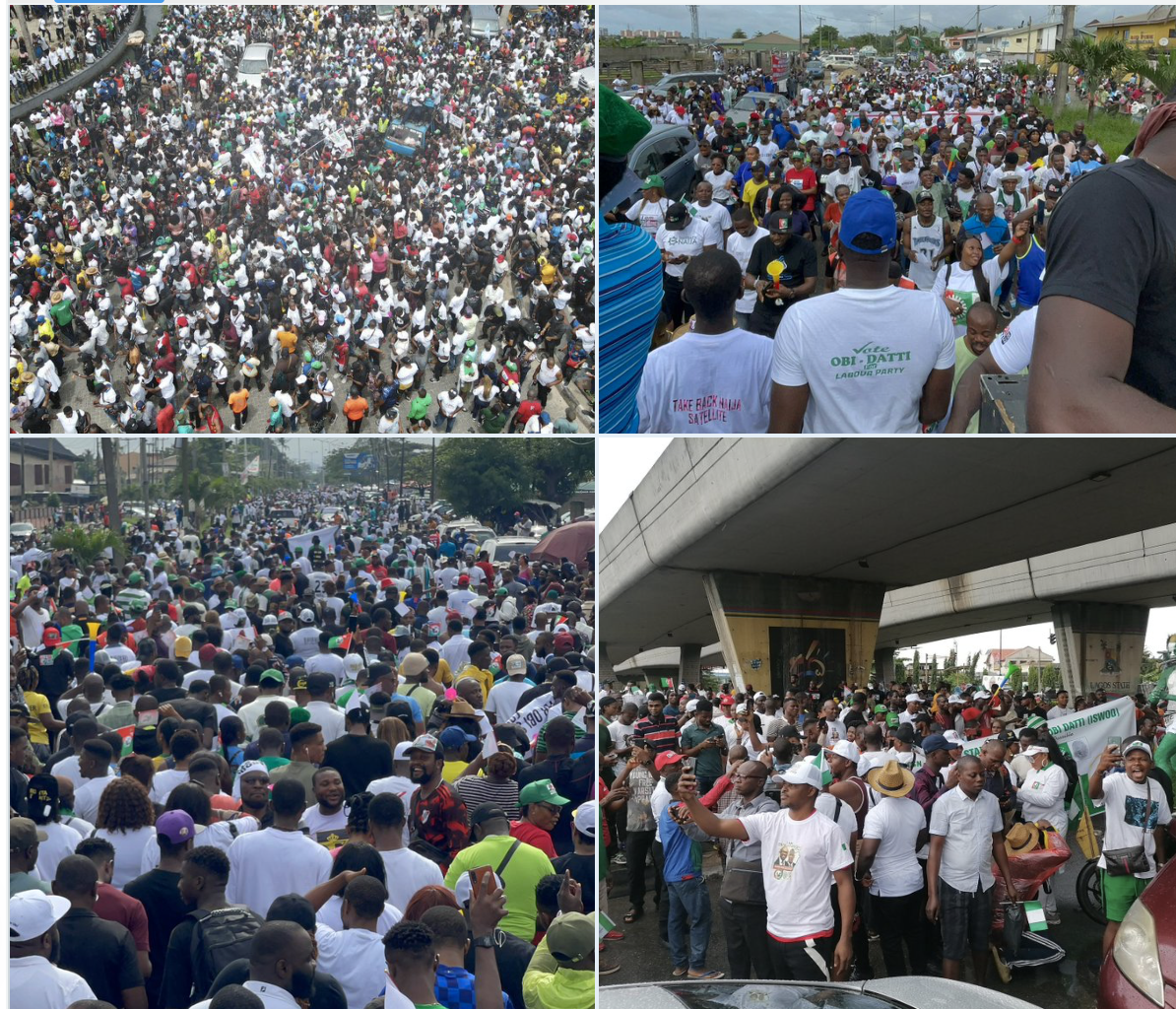 Major cities and towns in Nigeria were in a carnival mood, Saturday as the nation celebrated its 62nd independence anniversary while concurrently marching in support for the Labour Party presidential candidate Peter Obi.

Lagos, Bauchi, Asaba, Benin, Uyo, Kano and other major cities reported large crowds coming out in support of the popular presidential candidate. Many ditched the green-white-green colours of Nigeria for the green-red-white colours of the Labour Party while chanting the national anthem with whistles and drums. While policemen and Department of State Security agents in riot gear stood watch.

In his address to supporters on Independence Day, the Labour presidential candidate appealed to Nigerians to vote for Labour Party in the 2023 General Elections. “Fellow Nigerians, as our dear country marks her 62nd Independence anniversary, I bring you fraternal greetings. Even as we remain thankful, prayerful and hopeful for a brighter future; we are mindful that many Nigerians are resigned, frustrated and tired of the many years of leadership failure. Many of our compatriots remain in captivity held by bandits; millions are living in IDP camps as their homes are now part of ungoverned spaces. Many Nigerian children go to bed hungry.” Obi said.

He lamented on the state of the nation and the past and current leaders.
“Such people can hardly fathom the concept of independence and freedom; let alone a valid basis for celebration. At 62, rather than celebrate our patriotism, nationhood, unity, strength and diversity, Nigerians continue to grapple with the challenges of bad governance, replete with insecurity, worsening economy, corruption, and various forms of abuse of public offices and all manners of impunity. Each new day in Nigeria, instead of heralding progress and development, our national population, already weakened by poverty and hardship, are further burdened by new forms of disruptive challenges that are inimical to the societal well being. The catalogue of our national malaise are legion, and range from intermittent collapse of our national power grid and our universities remaining shut for 8 months.” The presidential candidate outlined why he is seeking the highest office and what the Obi-Datti administration will do. Making Nigeria a production-center for food security and export; effective legal and institutional reforms (rule of law, corruption and government effectiveness);the leapfrogging of Nigeria from oil dependency to the Fourth Industrial Revolution (4IR).

“Let me again reiterate that the Obi-Datti administration represents the best Hope, and Promise for a united, secure and productive Nigeria, where our citizens can coexist in our rich diversity as one happy and peaceful family.”

He bemoaned the wanton stealing of the nation’s resources for the past 62 years which has put many Nigerians in abject poverty which is fuelling insecurity and the mindless bloodletting. “Our national wealth, both cash and oil are reportedly stolen each day with unfettered impunity. Nigeria bleeds literarily and figuratively.” Obi noted.

The presidential candidate also stated that the challenges can be overcome with a transformative leadership at all levels of government.

“Today, Nigeria is on the cusp of her national redefinition and rebirth. We are also on the eve of seminal general elections; a critical juncture of hope mixed with understandable trepidation. Yet I am convinced that our collective national fate and our faith in Almighty God, will lead us to an electoral legitimacy in 2023 that will reaffirm that sovereignty in our Republic belongs to the people; and that we can collectively usher in a new and productive Nigeria. Nigeria’s morning has come.” Obi emphasised.

“This is the time for Nigerians to rescue their country from the clutches of failure, rascality and corruption that have held it down for long. That is the true independence Nigeria needs. We need independence from economic brigandage.” He concluded.