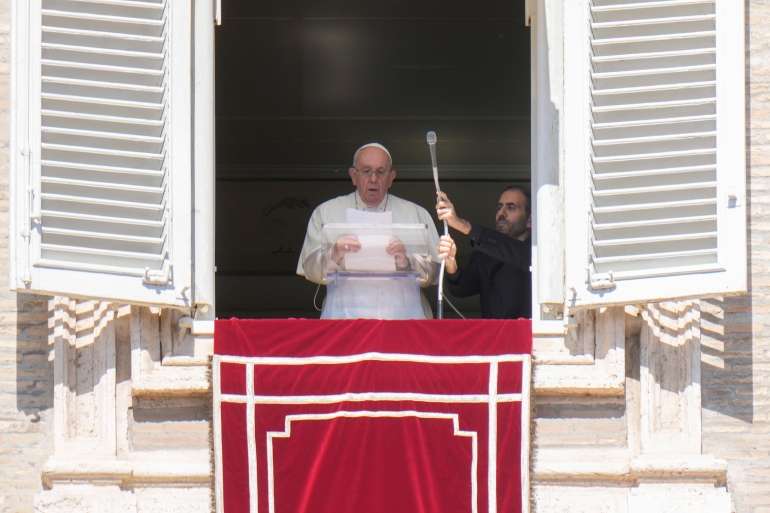 Pope Francis made the call during Sunday’s midday Angelus address

The Supreme Pontiff of the Roman Catholic Church, Pope Francis has called for a ceasefire in Ukraine, following the accession of four regions of the former eastern Ukraine into the Russian Federation during Sunday’s midday Angelus address before thousands of people in St Peter’s Square.

The pope for the first time directly begged Russian President Vladimir Putin and Ukrainian President Volodymr Zelensky to stop the “spiral of violence and death” in Ukraine, saying on Sunday that the crisis was risking a nuclear escalation with uncontrollable global consequences.

Vatican officials said the impassioned address was so sombre it was reminiscent of a radio peace appeal by Pope John XXIII in 1962 during the Cuban Missile Crisis.

In a series of tweets Sunday the Pope wrote. “The war in #Ukraine has become so serious, devastating and threatening as to cause great concern. In the name of God and of the sense of humanity that dwells in every heart, I renew my call for an immediate ceasefire. #Russia #Peace.”

He pressed for a diplomatic solution to the conflict.

“After seven months of hostilities in #Ukraine, let us use all diplomatic means, even those that have not been used so far, to bring an end to this terrible tragedy. War is an error and a horror! #Russia #Peace” Pope Francis stressed.

He then made an appeal to the Russian President in Russian. “My appeal is addressed first and foremost to the President of the Russian Federation, imploring him to stop this spiral of violence and death, also for the sake of his own people. #Ukraine #Russia @KremlinRussia_E

“Profoundly saddened by the immense suffering of the Ukrainian people as a result of the aggression they have suffered, I address an equally confident appeal to the President of #Ukraine to be open to serious proposals for peace.”

Pope Francis has repeatedly called or an end to the conflict saying that the only beneficiaries were arm dealers who go about fuelling wars.

The Pope ended his appeal with a prayer. “Let’s #PrayTogether, trusting in the mercy of God, who can change hearts, and in the maternal intercession of the Queen of Peace, spiritually united with the faithful all over the world. #Ukraine #Russia #Peace.”

Top US general warns that Ukraine has no chance of victory against Russia The top U.S. general on Wednesday said...