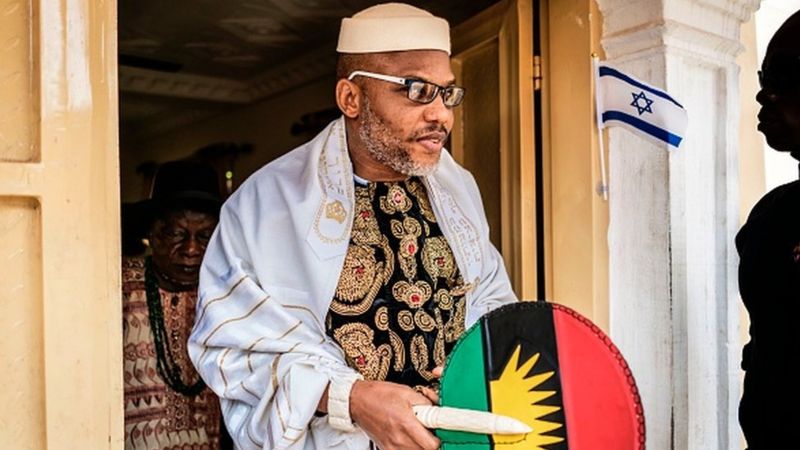 The Nigerian Court of Appeal sitting in Abuja Thursday struck out the terrorism charges against the Indigenous People of Biafra (IPOB) leader Nnamdi Kanu by the Federal Government (FG).

He was discharged and acquitted of the seven-count charge pending against him before the Federal High Court in Abuja. Justice Jummai Hanatu heading a three man panel said it was satisfied that FG flagrantly violated the law, when it forcefully rendered Kanu from Kenya to the country for the continuation of his trial.

Justice Hanutu took aim at the Executive branch for violating Kanu’s human rights that the government itself signed in various international treaties and conventions regarding extradition of suspects. The Appeal Court Justice ruled that the authorities had not followed due process.

The court noted that Nigeria is a signatory to the OAU Convention which it ratified on April 28, 2022, as well as the Charter of Human and Peoples Rights, which it said prescribed how a wanted person could be transferred from one country to the other. Any such request must be in writing with a list of the person’s offences which did the Executive did not do but what it did was international kidnapping.

The appellate court noted that FG failed to refute the allegation that the IPOB leader was in Kenya and that he was abducted and brought back to the country without any extradition proceeding.

It held that FG was “ominously silent on the issue” which it described as very pivotal in determining whether the trial court would still have the jurisdiction to continue with the criminal proceeding before it.

The appellate court held that FG’s action tainted the entire proceeding it initiated against Kanu and amounted to “an abuse of criminal prosecution in general”.

“The court will never shy away from calling the Executive to order when it tilts towards Executive recklessness”, the Appellate court held, even as it accused FG of engaging in “serious abuse of power”.

The court also ruled that a lower court order on proscription of the separatist group IPOB be upheld until it is set aside.

Reacting to the judgment, Kanu’s lawyer and human rights activist, Ifeanyi Ejiofor, on his Facebook page on Thursday, said Kanu won at last.

Kanu and his group seek to separate from the Nigerian federation and set up an independent state in the south east geo-political zone.

Moscow says it was not involved in the inquiry and its arguments rejected The decision taken on Thursday by a...