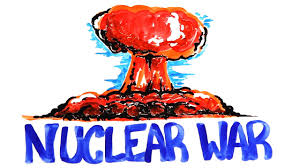 As the North Atlantic Treaty Organisation begins its nuclear deterrence exercise dubbed “Steadfast Noon” on Monday. The hypothetical question is asked what happens if the West decides to take out Russia in a pre-emptive nuclear strike?

Russia has envisaged such a scenario that it built a doomsday machine in the mid 1980s at the height of Cold War 1.0 with the west.President Ronald Reagan was dreaming of Star Wars a space based ballistic missile defence system and the belief that a nuclear war could be won. In the event that a nuclear strike from the three NATO nuclear powers; US, Britain and France take out the command and control of Russian nuclear forces, strategic nuclear bases and industrial complexes. There is a top secret remote mechanism that will trigger a retaliatory nuclear strike on the west launching dozens of missiles from deep underground bunkers in the Urals, from the remaining submarines at sea and aircraft still aloft. Thus assuring the doctrine of Mutually Assured Destruction. That mechanism is called the Perimeter or Dead Hand.

Still in operation and updated regurlarly. All Russian units armed with nuclear weapons have a backup communication system, in case a western first strike destroy the secure link to the Strategic Missile Forces command centre. The system was designed to be fully automatic, with the ability to decide an adequate retaliatory strike on its own with no (or minimal) human involvement in the event of an all-out attack.

In the event that it happens a variety of communication systems and sensors that control the military situation, able to track the presence and intensity of communications on military frequencies, and receive telemetric signals from the command posts, measure the level of radiation on the surface and determine intense radiation sources in the vicinity that, combined with the detection of short-term seismic disturbance, signifies a multiple-warhead nuclear strike, and the system may possibly even be able to track people still alive in command posts. The correlation system, after analysing these factors, may take the final step on launching the retaliatory strikes

One western hypothesis suggests that a dead man’s switch is utilised. Upon receiving information about a missile launch, the supreme commander sets the system active, which, if not detecting a signal to stop the combat algorithm, automatically launches the commanding missile. With a commanding radio warhead designated 15B99 designed by the LPI Design Bureau, which ensures the transmission of launch orders from the central command post to all missile launch complexes under nuclear attack and active electronic counter measures during the unpowered flight phase. It passes commands to all silos and all command centres of the Strategic Missile Forces with appropriate receivers in flight.

It is “the last line of retaliation”, as Viktor Murakhovsky, military expert and editor in chief of the magazine “Arsenal of the Fatherland” explained in a conversation with Tsargrad, talking about the features of the domestic “Perimeter” system.

“Even if the West launches a preventive nuclear strike against Russia, the Russians will have the last word – the system will work autonomously, and our enemies will pay for it almost immediately. None of our adversaries will be able to get beyond the Russian Perimeter.” He said.

“In fact, this is what Russian President Vladimir Putin warned before, saying that there would be no winners in a nuclear war. In the case of a preventive decapitation strike, the Perimeter will work effectively, “even if all armed forces are on leave”, and the aggressor country faces total annihilation.” Murakhovsky added.

“It is made for that very unlikely, almost unbelievable case, if we, I mean all defence systems of the Russian Federation, slept through a nuclear strike on Russia, nuclear warheads flew to our territory, there was an explosion,” the military expert explained. – It is a so-called “decapitation strike” according to the Americans’ terminology.”