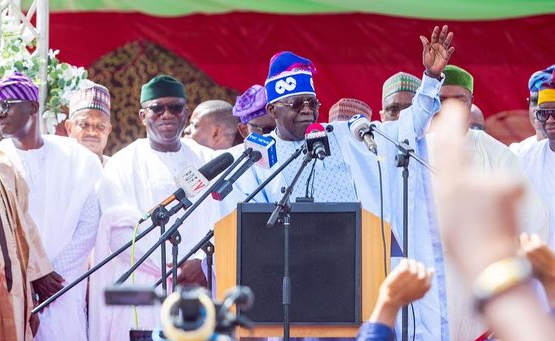 Barely a day after the Nigerian Peoples Democratic Party (PDP) presidential candidate Atiku Abubakar told his ethnic group the Hausa Fulani to vote for him only, the ruling All Progressives Congress (APC) presidential candidate Bola Tinubu has said that 95% of Yorubas should vote for him in the 2023 presidential election. He made the appeal during the swearing in ceremony of the new Ekiti state governor Abiodun Oyebanji in Ado Ekiti, the state capital, Sunday.

“Another election is coming by February. Will you be ready? Shine your eyes. Don’t forget your PVC,” Tinubu told the crowd made up of mostly Yorubas in Ado Ekiti.

“They’re coming; One will say he is Atiku (Abubakar). One will call himself Peter Obi. You don’t know them,” he said. “The only person you know is Bola Ahmed Tinubu and you must deliver 95 percent of your votes.” He said interspersing his speech with his native Yoruba. Tinubu is supposedly said to hail from Osun state and is relying on his ethnic base to propel him to the presidential villa.

On Saturday, Abubakar the PDP hopeful told a town hall gathering full of Hausa-Fulanis in Kaduna that northerners should trust him with their votes.

“I stand before you as a pan-Nigerian of northern origin.” Atiku Abubakar a Hausa Fulani hails from Adamawa state.

The Labour Party presidential candidate Peter Obi is Igbo and from Anambra state in the the south east geo-political zone and told his supporters who cut across all the over 250 ethnic groups in Nigeria. “Don’t listen to the tribal sentiment which is an elite conspiracy used to keep Nigeria poor. Don’t vote for me based on my tribe or religion, vote for me based on my character, competence and commitment to deliver on promises.”