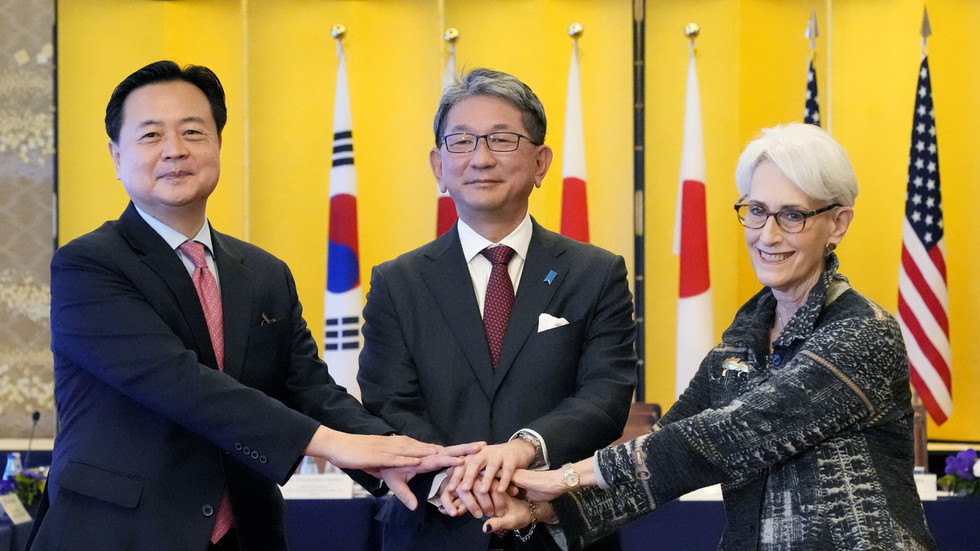 US promises to protect Asian allies with nuclear weapons

The US military will unleash its full arsenal, including nuclear weapons, to protect South Korea and Japan from attack, a top State Department official has said, also blasting Pyongyang for its “dangerous” and “destabilizing” weapons tests, while vowing “ironclad” cooperation with allies in Asia.

Speaking ahead of multiple rounds of talks in Tokyo with her South Korean and Japanese counterparts on Tuesday, US Deputy Secretary of State Wendy Sherman said Washington would deploy its “nuclear, conventional and missile defence” forces should the two allies ever come under attack, emphasising the US’ ‘nuclear umbrella’ policy. Sherman went on to condemn recent missile launches by North Korea – a major focus of this week’s meetings – slamming the DPRK’s record number of weapons tests this year as “deeply irresponsible, dangerous, and destabilizing.”

In addition to a flurry of weapons tests and shows of force in retaliation to joint US-South Korean war games, the North recently announced that it had carried out a drill simulating the loading of tactical nuclear warheads into a silo hidden below a reservoir, part of a series of exercises launched in September to ensure the readiness of its nuclear forces.

North Korea maintains its nuclear arsenal is intended only for self-defense, and has criticized joint US-South Korean military drills time and again as rehearsals for an invasion.

North Korea maintains its nuclear arsenal is intended only for self-defense, and has criticized joint US-South Korean military drills time and again as rehearsals for an invasion.

US officials have repeatedly predicted an imminent North Korean nuclear test in recent months, though the country has refrained from any live detonations since 2017. Nonetheless, the forecasts come amid a major spike in tensions between the two Koreas, as both sides continue to issue threats and carry out military demonstrations.

On Wednesday, Washington, Seoul, and Tokyo pledged deeper military ties amid “provocations” by Pyongyang, and also “agreed that an unparalleled scale of response would be needed in case North Korea conducts a seventh nuclear test,” a South Korean official told reporters.