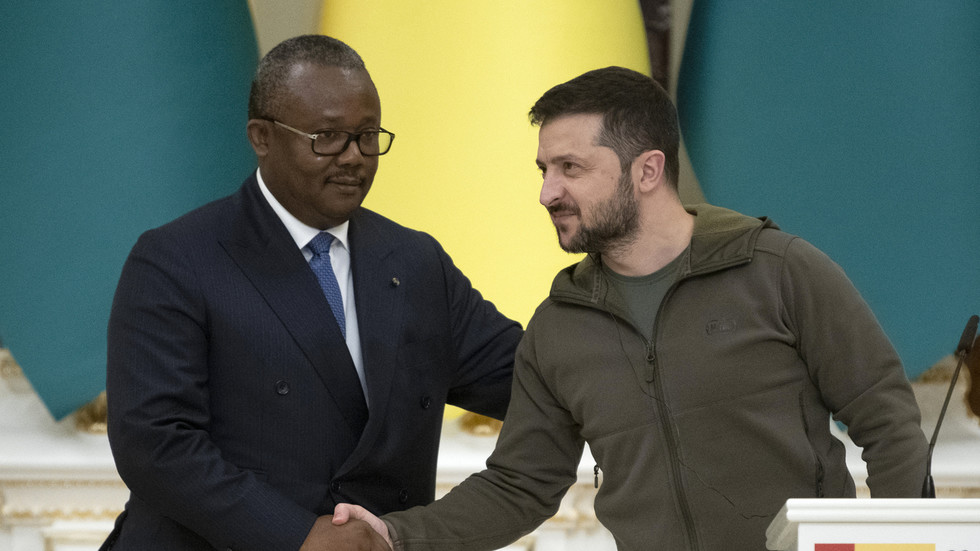 Umaro Mokhtar Sissoco Embalo, the president of Guinea-Bissau and current ECOWAS chairman claimed on Wednesday that Russian President Vladimir Putin asked him to convey a “message” to Ukrainian President Vladimir Zelensky about the importance of “direct dialogue” between Moscow and Kiev. Embalo made this revelation at a joint press conference with Zelensky in Kiev, one day after his meeting with Putin.

“My dear brother, yesterday I was in Russia with President [Vladimir] Putin, who asked me to give you a message, to talk to you, considering that a direct dialogue is very important for our future joint actions,” Embalo said.

A video of the press conference was published on Zelensky’s Telegram channel, with Embalo’s remarks translated into Ukrainian.

The president of Guinea-Bissau also revealed that he saw himself as the “bearer of certain impulses” by contributing to the restoration of relations between Russia and Ukraine.

Before his meeting with Zelensky, Embalo told journalists that he found Putin “to be very open to negotiating with President Zelensky” and that he was looking forward “to conveying this goodwill” to the Ukrainian leader.

Zelensky, responding at the press conference to Embalo’s remarks, said that in order to build bridges between countries, “one should not blow up the infrastructure.” Zelensky was apparently referring to the strikes on Ukraine’s power stations launched by Russia on October 10 in what Moscow described as retaliation for Kiev’s “terrorist attack” on the Crimean Bridge. The Ukrainian leader also said that any conversation involves respect of one country for another one, starting from respecting “its territorial integrity, sovereignty, and borders.”

The president of Guinea-Bissau also revealed that he saw himself as the “bearer of certain impulses” by contributing to the restoration of relations between Russia and Ukraine.

Before his meeting with Zelensky, Embalo told journalists that he found Putin “to be very open to negotiating with President Zelensky” and that he was looking forward “to conveying this goodwill” to the Ukrainian leader.

Earlier this month, Putin cited Ukraine’s refusal to talk as the reason behind the absence of negotiations between the two countries. He also noted that during Türkiye-mediated talks in late March, Russia and Ukraine reached a preliminary agreement, but as soon as Russian troops were pulled back from Kiev, “the leadership in Kiev lost all desire to have talks.”

“We would like to get large ships for our Navy. Maybe Russia would be able to supply us with such ships? And then, we’ll see how we can pay for these frigates. Maybe, we will even be able to order a helicopter,” Umaro Sissoco Embalo said.

“Alright, we will discuss all that,” Putin said.

The Guinea-Bissau President also mentioned the problem of sea piracy. Putin noted that combating such piracy is “a very needed area of cooperation.”

“The things that we discussed, it is extremely important to come to a consensus on all these issues,” he added.

The leaders also touched upon the issue of extraction of naval biological resources. In particular, Putin mentioned that “it is necessary to build these big trawlers that not only catch fish, but also process them.”

He also proposed discussing issues related to the training of personnel.

“We’ve discussed that with you, and regarding [staff] in all areas. As we agreed, we will increase the quota for students from your country for the next year,” the President said during the meeting.