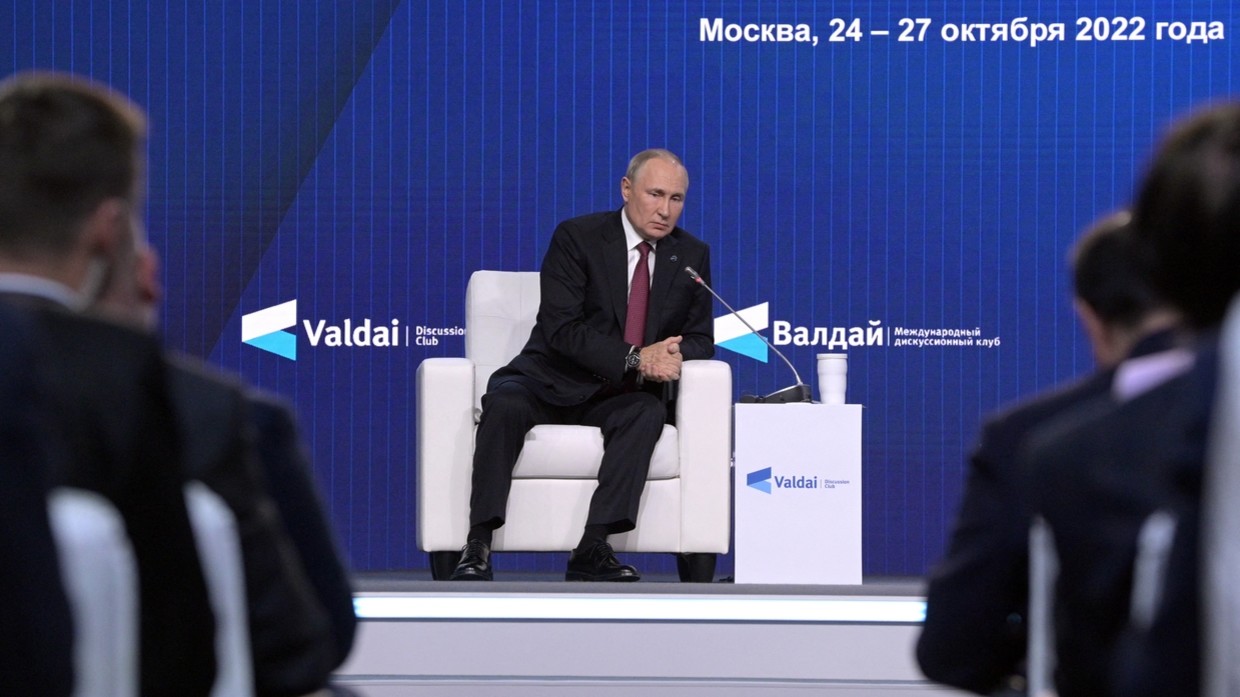 The age of Western global dominance is becoming a thing of the past, and the world has the most important decade since the end of World War II ahead, Russian President Vladimir Putin said during the annual Valdai international discussion club meeting Thursday.

In his speech, confident and relaxed Putin underscored that Russia does not oppose Western elites and does not aspire for hegemony in the new multipolar world; he juxtaposed true integration to the Western “neo-colonial” globalisation, and called to “build a symphony of the human civilisation.” Answering the questions from the participants, Putin said he sees no point in relocation of the Russian capital or nationalisation of businesses, made a joke about nuclear war and told a joke about freezing Germans.

“The West claims all resources of mankind, and the “rule-based order” that it proposes, is supposed to allow it to live without any rules at all. The West is incapable of ruling the mankind alone, but is desperately trying to do that, and “most nations of the world no longer want to tolerate that.”

“The West parlayed its power over the world in its game, but this game is, without doubt, dangerous, bloody and […] dirty: “it denies sovereignty of countries and peoples, their identity and uniqueness; it disregards interests of other states.”

“The West must remember that “one who sows wind, shall reap the whirlwind.” The West and other centers of a multipolar world will have to begin an equal conversation about the future, and “the sooner, the better.”

The modern liberalism has change beyond recognition, into absurdity, when alternative points of view are being declared undermining, and any criticism is perceived as “Kremlin’s machinations”: “That’s delirious, what have they come to.”

The neo-liberal model of the world “a la America” is suffering “not merely systemic, but doctrinal crisis”: “They simply have nothing to offer the world except for their dominance.”

The West’s belief in its infallibility is dangerous, because it is one step away from the “desire of the most infallible to simply destroy those they don’t like, to ‘cancel’ them, as they say.” But history will set everything straight and will “cancel” those who somehow thought themselves entitled to order the world culture around on their own whim.

The global civilization is based on traditional societies with their traditional values, which, unlike the neo-liberal ones, are unique to every country. The West is entitled to have “dozens of genders and gay prides,” but must not seek to impose it on others.

Russia has not considered and does not consider itself a West’s enemy, and offered to live in accord back in the day, but was met with rejection.

There are “at least two different Wests” – the traditional one, with extremely rich culture, and the aggressive and neo-colonial one, whose diktat Russia will never reconcile with.

The West was unable to “wipe Russia off the geopolitical map,” and it will never be able to,” just like nobody will be able to dictate Russia, what society to build and on which principles.

“Russia does not challenge Western elites. Russia simply defends its right for existence and free development. Meanwhile, we do not plan to become some new hegemon.”

Moscow also does not plan to impose its own values: “Unlike the West, we do not seek to get into somebody else’s backyard.”

The world stands on a historic threshold, facing “probably, the most dangerous, unpredictable and at the same time important decade since the end of World War II.” The importance of today is that all countries now have an opportunity to choose its own, original development path.

The new world order must be based on law and justice, be free and fair. Global trade must benefit the majority, not individual corporations; technological development must reduce inequality instead of increasing it.

The world also needs new, independent international financial platforms to replace those discredited by the West as international reserves: “First, [the West] devalued them through inflation in dollar and euro zone, and then it went full on and pocketed our gold and foreign exchange reserves.”

Multipolarity is a real, and effectively the only chance for Europe to restore its political and economic capability, which is “seriously limited” today.

“As long as nuclear weapons exist, so will exist the treat of it being used.” Situations, in which Russia might use its nuclear weapons, are all written down in its doctrine.

Moscow was never the first to talk about the use of nuclear weapons, it only “responded by hinting” to remarks made by Western leaders. Russia believes that the West is deliberately blackmailing it: for example, no one in the West reacted to claims made by “girl a bit out of her mind” Liz Truss, the UK ex-Prime Minister.

There is no military or political sense for Russia to strike Ukraine with nuclear weapons, and the “today’s fuss around nuclear threats” only aims to pressure Moscow’s allies, friendly and neutral states.

Russia welcomes IAEA’s plans to send a mission to check the reports about a “dirty bomb,” and this “must be done as soon as possible and as wide as possible,” because Kiev is doing everything to cover its tracks.

Had Russia not started the special military operation, the situation would have become increasingly worse and future casualties – higher for Moscow. Meanwhile, Putin disagreed that the enemy in Ukraine was underestimated.

The main goal of the operation remains to help the people of Donbass. Russia could not simply recognize the republics’ independence: “They cannot survive alone, it is an obvious fact.”

The events in Ukraine can partially be interpreted as a civil war, because Russians and Ukrainians are a single people, whose people found themselves in separate states.

“Russia, who created the modern Ukraine, can be the only true, serious guarantor of Ukrainian statehood, sovereignty and territorial integrity.”

Moscow is still ready for negotiations with Kiev, but Kiev decided not to continue them. Washington should give Kiev a signal that problems must be resolved peacefully.

The events in Ukraine showed that Russia is a great country that proved itself much stronger amid Western sanctions than anyone thought, even Russia itself. The peak of problems caused by the sanctions is already behind, and no official has disappointed with their actions in the past year.

The special military operation inflicts losses on Moscow, human losses first and foremost, but there are also “huge gains”: “What is happening will, undoubtedly, eventually benefit Russia and its future.”

Russia has an almost complete consensus regarding the need to combat external threats; “people of absolutely pro-Western views” comprise a small part of the society.

Russia treats China as a close friend, and their leaders have similar relations. However, back in February, Putin did not warn Chinese leader Xi Jinping about the upcoming military operation.

Russia and India have never had “difficult issues”: “We have always only supported each other.” When New Delhi asked to increase fertilizer shipments, they increased more than tenfold.

In response, British Foreign Secretary James Cleverly said: “Putin’s message today to the Russian people is unclear, untrue and unedifying. What is crystal clear, is our message to the world: Aggressors must not be able to invade their neighbours with impunity.”