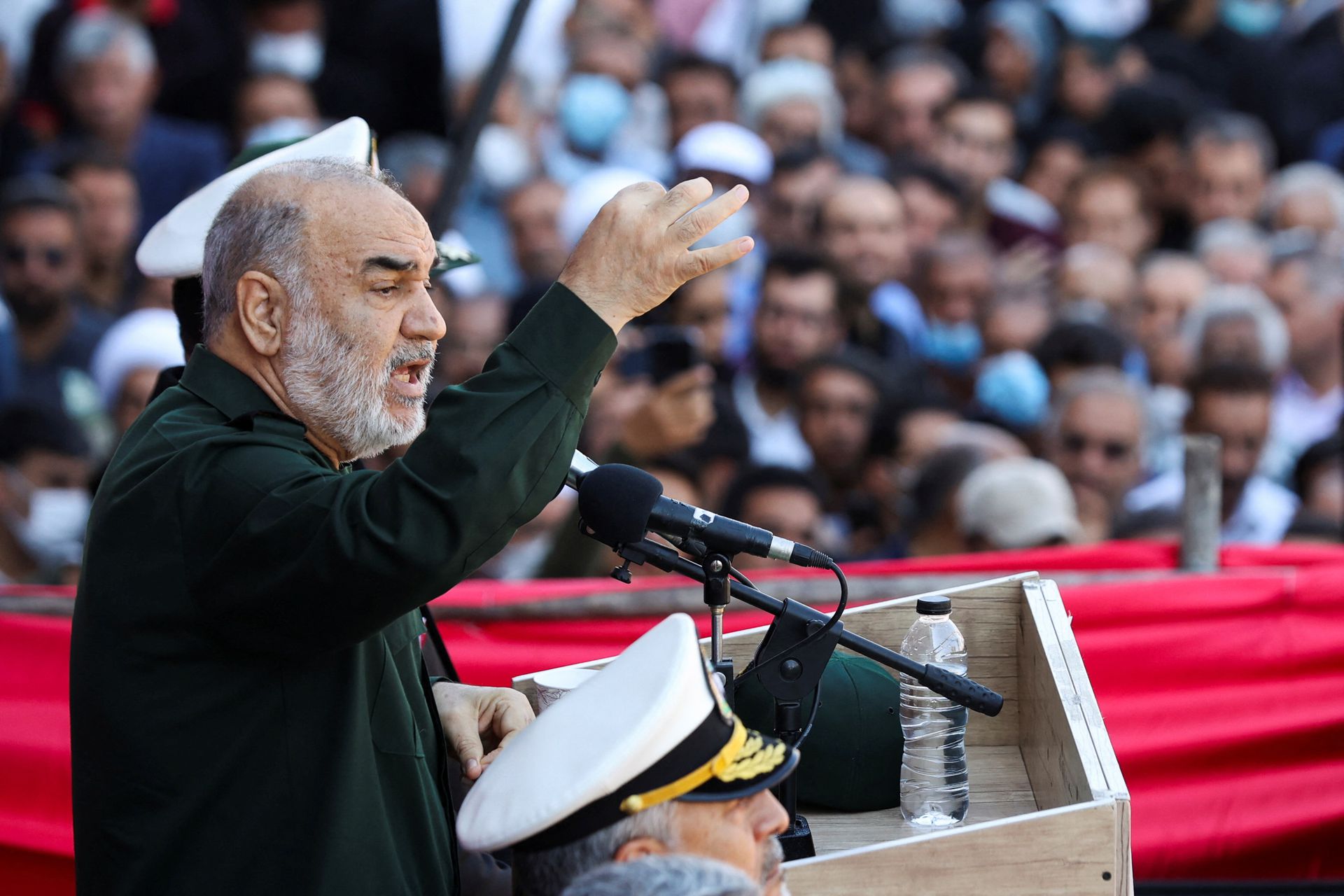 Thousands of Iranians gathered in Shiraz, Saturday to bid farewell to the victims of the Daesh-claimed terrorist attack that targeted the Shah-e Cheragh shrine. The attack took place on Wednesday at Maghrib prayer time, when a terrorist opened fire at the pilgrims with his AK-47 rifle, killing at least 13 people and injuring dozens of others.

The attack prompted national grief and sorrow amid a continued wave of unrest that, some believe, paved the way for Daesh to carry out its heinous assault.

Iran’s top military officials, both from the IRGC and the army, attended the funeral. At the ceremony, IRGC chief commander General Hossein Salami delivered an ardent speech in which he pondered over the roots of unrest and riots in Iran. The speech came a day after Iran’s two intelligence agencies, the Ministry of Intelligence and the IRGC Intelligence Organization, issued a lengthy joint statement that explained the root causes of the unrest. Both Salami’s speech and the joint statement had one thing in common: foreign meddling in Iran.

General Salami said the Biden administration, together with its allies in the region, stand behind the unrest. Addressing Iranian youth, the general said Biden isn’t directly ordering Iranian youth to take to the streets. Instead, he is using complex ways to instigate unrest in Iran, including through the media. He said the unrest in Iran was planned in American and Israeli think tanks.

General Salami also addressed the youth who got fooled by the enemy. “O, youth who got bamboozled! Don’t sell out your honor to America. Don’t slap the defenders of security in the face and don’t let [America] dress you as American soldiers. Do not become a chess pawn for the enemy. In this land, no one will let you create chaos and riot,” the general said.
He asserted, “We tell the youth and those who got swindled that today is the end of riots. Don’t come to the streets anymore. What do you want from this nation. Don’t think that Biden and other officials from the Zionist regime and the House of Saud should call you so that you take to the streets. [Instead] they force you [to do so] through their media.”

General Salami’s remarks echoed the joint statement, which extensively reviewed how the West and its regional allies tried to interfere in Iran.

“Numerous examples and undeniable references of the all-out role of the terrorist American regime in engineering, implementing, and maintaining” the unrest are being revealed by more than a year of “continuous and precise” intelligence monitoring coupled with documents that have been acquired during the most recent unrest, the statement said.

In an early October speech, Leader of the Islamic Revolution Ayatollah Seyed Ali Khamenei had expressed a similar assessment. He said at the time that the United States and Israel exploited the death of Mahsa Amini to stage riots in Iran and if this incident had not taken place, they would have found another pretext to do what they did.

“These riots were planned. These riots had been planned. If the incident with the young girl had not taken place, they would have found another excuse to create insecurity and riots in the country in the beginning of the month of Mehr (September) this year. Who designed these plans? I openly state that these schemes were designed by the US, the usurping, fake, Zionist regime, and their mercenaries. They sat down and planned. They devised these schemes. Their employees, mercenaries, wage earners, and some treasonous Iranians abroad helped them,” the Leader said.

He added, “Sometimes when I say ‘a certain event was planned by a foreign enemy,’ some are very sensitive to the term ‘foreign enemy.’ When I say, ‘Such and such was the work of foreigners. It was carried out by foreign enemies,’ some quickly jump to the defense of the US and Zionist intelligence services. They use all sorts of fallacious analyses and rhetoric to try to show that foreigners were not in any way involved in that event.”

Many western observers say that the speech was a sign that the IRGC will be deployed to squash the unrest.