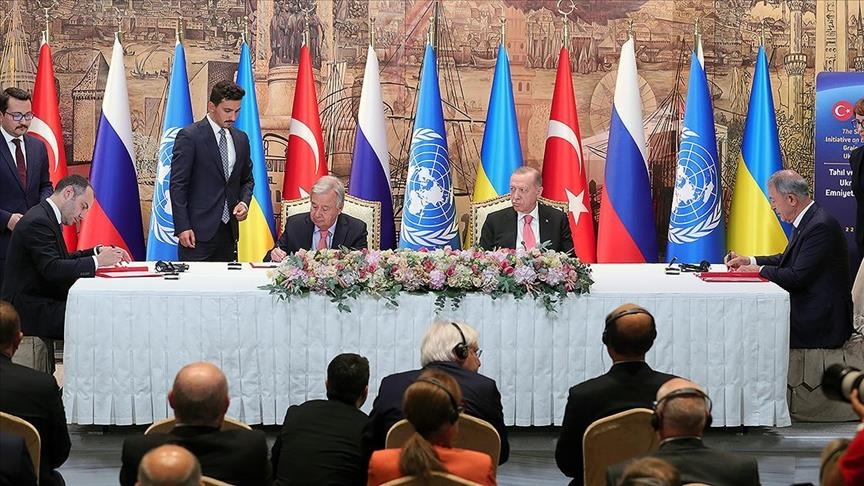 The Russian Navy will resume its blockade of Ukrainian ports in the Black Sea after a failed drone attack on its ships overseeing the crucial “grain deal corridor”, Saturday.

In a post on its Telegram channel, the Russian Ministry of Defence said Russia “is suspending its participation in the implementation of agreements on the export of agricultural products from Ukrainian ports”.

It explained that the move was prompted by “a terror attack” against the ships of the Black Sea Fleet and civilian vessels involved in ensuring the security of the grain corridor. The ministry also alleged that the bombing was organised with the involvement of British military.

The Russian Foreign Ministry in a statement said. “As a result of the actions (which cannot be qualified as anything other than a terrorist attack) by the Ukrainian armed forces, led by the British specialists, directed, in particular, against Russian ships ensuring the functioning of the humanitarian corridor, the Russian side can no longer guarantee the safety of civilian dry cargo ships participating in the Black Sea Grain Initiative and will suspend its implementation from today for an indefinite period.”

“Russian blackmail is primitive across the board: blackmail in nuclear, energy and food field,” he stated, adding that all supposed Russian ploys are “too simple and predictable.”

Earlier on Saturday, Russia’s Agriculture Minister Dmitry Patrushev signaled that Moscow is ready, with Türkiye’s help, to send the world’s poorest countries up to 500,000 tons of grain within the next four next months.

He noted that considering this year’s harvest, Russia “is fully ready to replace Ukrainian grain” and arrange deliveries to“all interested countries” at a reasonable price.

“The grain deal not only did not solve the problems of countries in need, but even aggravated them in a sense. We can see where the ships from Ukraine were heading – Italy, Spain, and the Netherlands. For some cargoes, the share of EU countries ranges from 60 to 100%. These are not the states that are experiencing a real food problem,” the minister said.

Russia earlier warned that it could quit the grain deal if an agreement to ease restrictions on its food and fertilizer exports were not implemented. Moreover, following the blast on the strategic Crimean Bridge, Russian President Vladimir Putin said that if turns out that Ukraine – the country that Moscow accused of carrying out the attack – used grain corridors to transport explosives, “it would put the very existence of these corridors in question”.

The breakthrough deal between Moscow and Kiev was reached in Istanbul in July with mediation by the UN and Türkiye. It aimed to unlock agricultural exports via the Black Sea from Russia and Ukraine – two of the world’s leading grain exporters – which had ground to halt due to the conflict between the two nations.