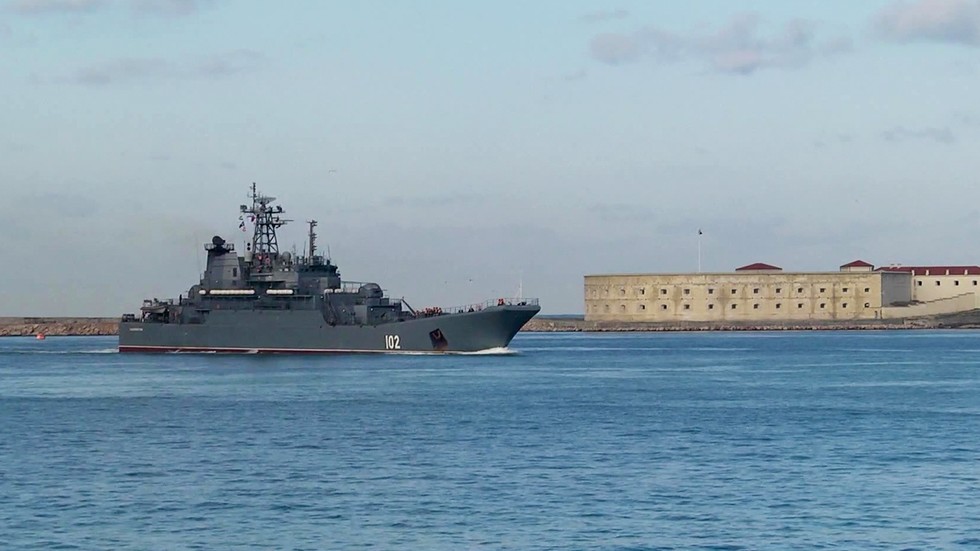 The Russian Defence Ministry in a briefing Saturday said the Navy repelled a massive drone attack on the fleet at the Sevatopol base marking the first time in military history where drones were deployed to attack surface ships.

“Today at 4.20 am, the Kiev regime carried out a terrorist attack against the ships of the Black Sea Fleet and civilian ships that were on the outer and inner roadsteads of the Sevastopol base.” The RuMOD spokesman Igor Konashenkov said.

“The prompt measures taken by the forces of the Black Sea Fleet destroyed all air targets.”

“When repulsing the terrorist attack on the outer roadstead of Sevastopol, four marine unmanned vehicles were annihilated by shipborne weapons and maritime aviation of the Black Sea Fleet, and three more were destroyed on the inner roadstead.” He went on further.

For Russia. Russian President Vladimir Putin, center, speaks to a soldier as he visits a military training center of the Western Military District for mobilized reservists in Ryazan region, Russia, Oct. 20, 2022.

The Russian spokesman that the ships attacked by NATO drones were involved in ensuring the security of the “grain corridor” the United Nations (UN) initiative to lift the Russian naval blockade and allow the export of agricultural products.

Destroyed. A Turkish-made Bayraktar drone of the Ukrainian Armed Forces on display at the Army-2022 expo in the Moscow Region. ©  Sputnik / Evgeny Biyatov

“It should be emphasised that the ships of the Black Sea Fleet that were subjected to the terrorist attack are involved in ensuring the security of the ‘grain corridor’ as part of an international initiative to export agricultural products from Ukrainian ports.” He said.

Moscow then blamed “British specialists” for training the Ukrainian personnel. “The preparation of this terrorist act and the training of military personnel of 73rd Marine Special Operations Center were carried out under supervision of British specialists in the city of Ochakov, Nikolayev region in Ukraine.”

In a shocking revelation the ministry also revealed that Britain was involved in blowing up the Nord Stream pipelines.

“According to the available information, representatives of this unit from the British Navy were involved in plotting, organising, and implementation of the terrorist attack in the Baltic Sea on 26 September this year to blow up the Nord Stream 1 and Nord Stream 2 gas pipelines.”

The United Kingdom denies the accusation. “Russia’s allegations of ‘British role’ in Crimea and Nord Stream attacks are false, Russian Ministry of Defence is resorting to peddling false claims of an epic scale.” The British MOD tweeted in response.