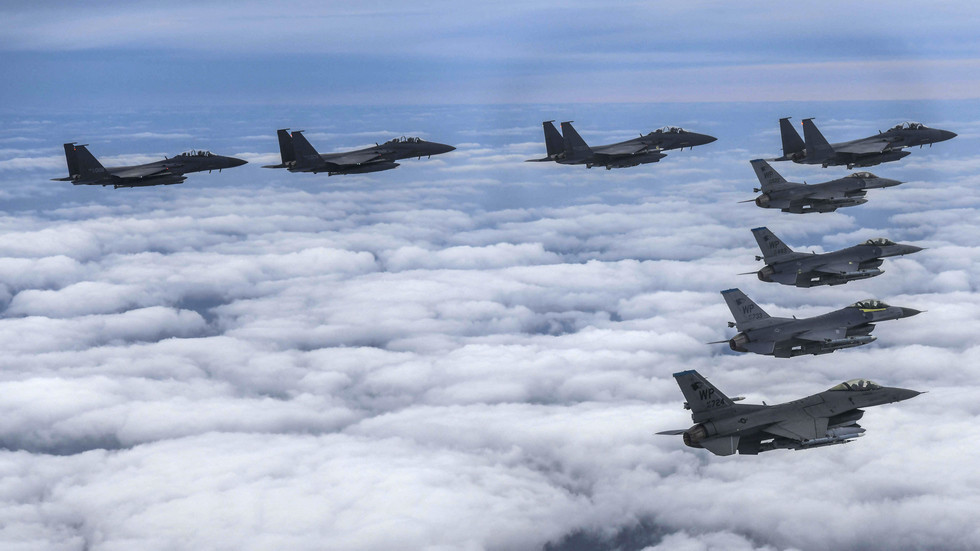 The United States and the Republic of Korea began a massive air drill involving 240 aircraft, Monday drawing the ire of the Democratic Peoples Republic of Korea which itself was preparing for a nuclear weapon test.

The ‘The Vigilant Storm’ exercise is expected to last throughout Friday and will see the deployment of about 140 South Korean planes, including state-of-the-art F-35A stealth fighters as well as F-15K and KF-16 jets.

Meanwhile, the US has sent around 100 aircraft, including F-35B fighters and a number of electronic warfare and tanker planes, as well as U-2 high-altitude reconnaissance aircraft. The maneuvers will be also attended by Australia, which has deployed a KC-30A tanker transport.

South Korea and the US will conduct about 1,600 sorties, which will be “the largest number ever for this annual event,”according to the US Air Force. Meanwhile, the South Korean Air Force noted that the two sides “will strengthen the operational and tactical capabilities” in order to “deter and respond to North Korean provocations”.

“The situation in the Korean Peninsula and its vicinity has entered the serious confrontation phase of power for power again due to the ceaseless and reckless military moves of the U.S. and south Korea,” North Korea’s foreign ministry said in a statement carried on the country’s official KCNA news agency.

Washington and Seoul believe Pyongyang may be about to resume testing of nuclear bombs for the first time since 2017 and have embraced a strategy of “deterring” Pyongyang through major military drills that some current and former officials say may exacerbate tensions.

The foreign ministry statement said North Korea was “ready to take all necessary measures for defending its sovereignty, people’s security and territorial integrity from outside military threats.”

“If the U.S. continuously persists in the grave military provocations, the DPRK will take into account more powerful follow-up measures,” it said, using the initials of North Korea’s official name.

“If the U.S. does not want any serious developments not suited to its security interests, it should stop the useless and ineffective war exercises at once. If not, it will have to totally take the blame for all the consequences.”

North Korea condemns the joint drills as a rehearsal for invasion and proof of hostile policies by Washington and Seoul. It has launched missiles, conducted air drills, and fired artillery into the sea in response to the exercises.