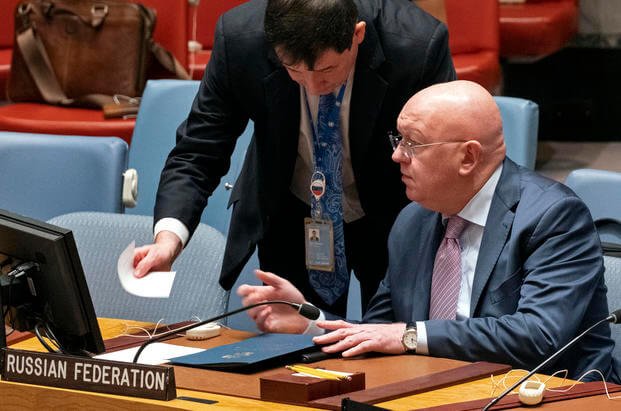 Russia only got support from China in the vote on its resolution, with the U.S., Britain and France voting “no” and the 10 other council nations abstaining. The resolution was not approved because it failed to get the minimum nine “yes” votes required for adoption.

The 2-3-10 vote reflected the council’s continuing opposition and skepticism about Russia’s actions since its Feb. 24 invasion of Ukraine. The council has been paralyzed from taking any action against Russia’s military offensive because of Russia’s veto power.

Russia circulated the draft resolution and a 310-page document to council members last week alleging that military biological activity is taking place at biological laboratories in Ukraine with support from the U.S. Defense Department.

Russia’s deputy ambassador Dmitry Polyansky said after the vote that his government was “extremely disappointed” that the council did not respond positively to its request to establish a commission comprising the Security Council’s 15 members to carry out an investigation of its complaint as allowed under Article VI of the biological weapons convention.

He claimed “Western countries demonstrated in every way that the law does not apply to them” and “are ready to trample any norm, to flout any rule,” accusing them of a “colonial mentality.”

U.S. Ambassador Linda Thomas-Greenfield countered that the United States voted against the resolution “because it is based on disinformation, dishonesty, bad faith, and a total lack of respect for this body.”

Before the vote, Russia’s Polyansky called the resolution “a considerable milestone” that would show whether the Security Council was prepared to act in line with international law giving state parties to the biological weapons convention the right to seek an investigation at the Security Council.

Ukraine does have a network of biological labs that have gotten funding and research support from the U.S. They are owned and operated by Ukraine and are part of an initiative called the Biological Threat Reduction Program that aims to reduce the likelihood of deadly outbreaks, whether natural or manmade.

Russia’s U.N. Ambassador Vassily Nebenzia accused the U.S. of conducting work in Ukraine with deadly pathogens — including cholera, plague, anthrax and influenza — that couldn’t be justified under the guise of public health. He said documents and evidence recovered by Russian authorities suggested a military application.

Nebenzia told the Security Council that the Russian military during its time in Ukraine had recovered drones capable of spraying bioagents as well as documents that he said related to research on the possibility of spreading pathogens through bats and migrating birds.

Thomas-Greenfield countered that Russia’s claims are “absurd for many reasons, including because such species, even if they could be weaponized, would pose as much a threat to the European continent and to Ukraine itself as they would to any other country.”