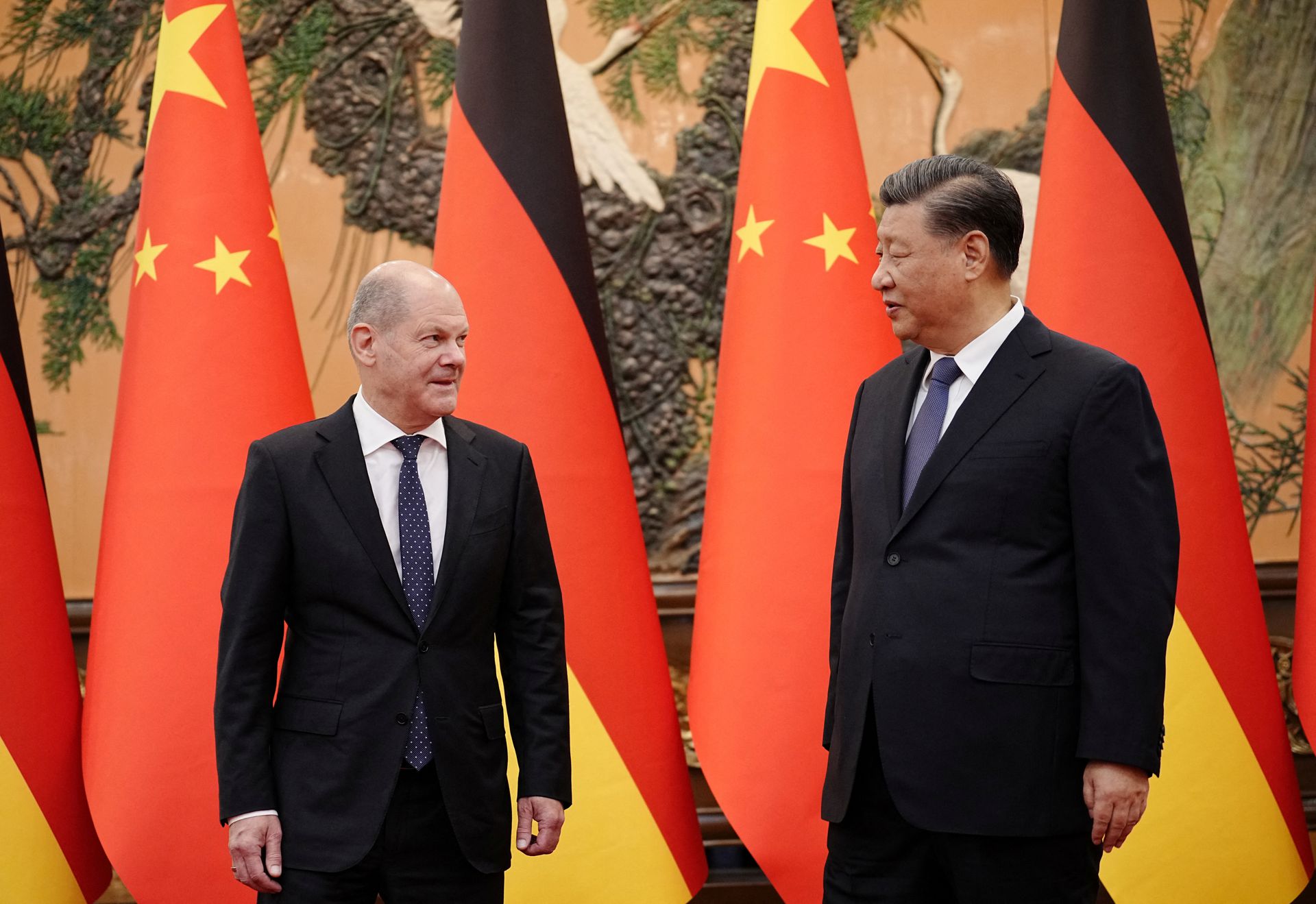 The German Chancellor Olaf Scholz has met the Chinese President Xi Jinping in Beijing in his first state visit to China.

In the first visit by a G7 leader to China since the COVID-19 pandemic, Scholz pressed Xi to prevail on Russia to end its invasion of Ukraine, saying Beijing had a responsibility as a major power to do so.

Xi agreed that both leaders “jointly oppose the use or threat of use of nuclear weapons” over Ukraine, according to a readout by the state-run Xinhua news agency, though he refrained from criticising Russia or calling on Moscow to withdraw its troops.

“President Xi and I agree: nuclear threats are irresponsible and incendiary,” Scholz said after the meeting. “By using nuclear weapons, Russia would be crossing a line that the community of states has drawn together.”

Scholz arrived in Beijing on a one-day visit that tested the waters between China and the West after years of increasing tensions, with talks touching on reciprocal market access, climate change and COVID-19 vaccines.

Scholz made the trip while facing criticism from within his own coalition about relations with Beijing. He has tried to balance securing a level playing field for European companies with shedding Germany’s heavy reliance on the Chinese market. Scholz arrived Beijing with a high-level business delegation including carmakers Mercedes-Benz and Volkswagen, and chemicals giant BASF.

During lunch with Scholz, Xi stressed that it is easy to destroy political trust but difficult to rebuild it, and both sides need to take care of it, according to Xinhua.

Earlier, while greeting Scholz at the Great Hall of the People in the heart of Beijing, Xi urged the two countries to work more closely on international issues.

Before their lunch of beef strips, prawn and sweet and sour fish, Scholz told Xi that Russia’s invasion of Ukraine was creating problems for the rules-based global order, according to a recording of the remarks provided by the German delegation.

Scholz then met outgoing premier Li Keqiang. He told Li that it was clear China and Germany were no friends of “decoupling”, alluding to their respective economies.

During a news conference after his discussion with Li, Scholz said he raised the issue of Taiwan. China claims the island as its own territory and has never renounced the use of force to bring it under its control.

“Like the U.S. and other countries, we are pursuing a one-China policy,” Scholz said. “But I have made equally clear that any change in Taiwan’s status quo must be peaceful or by mutual consent.”

Scholz and the delegation of German business leaders flying with him were administered COVID-19 tests upon landing in Beijing on Friday morning. Chinese medical staff donned hazmat suits and entered the plane to conduct the tests, according to the Reuters reporter accompanying the delegation.

China’s strict zero-COVID policy and growing friction with the West have made it unfeasible for leaders of major Western powers to visit China, while Xi only resumed foreign trips in September.

Scholz is pushing for greater market access at a time when the German economy, Europe’s largest, is fighting decades-high inflation and a looming recession. Xi agreed to allow Germany’s BioNTech to become the first non-Chinese drug manufacturer to sell its COVID-19 vaccine to expatriates in China and in a blow to US aircraft manufacturer, Boeing, China’s state buying agency CASC said it had signed a bulk agreement for 140 Airbus aircraft including 132 A320-family jets and eight A350 wide-body aircraft during Scholz’s one-day visit worth $17 billion.