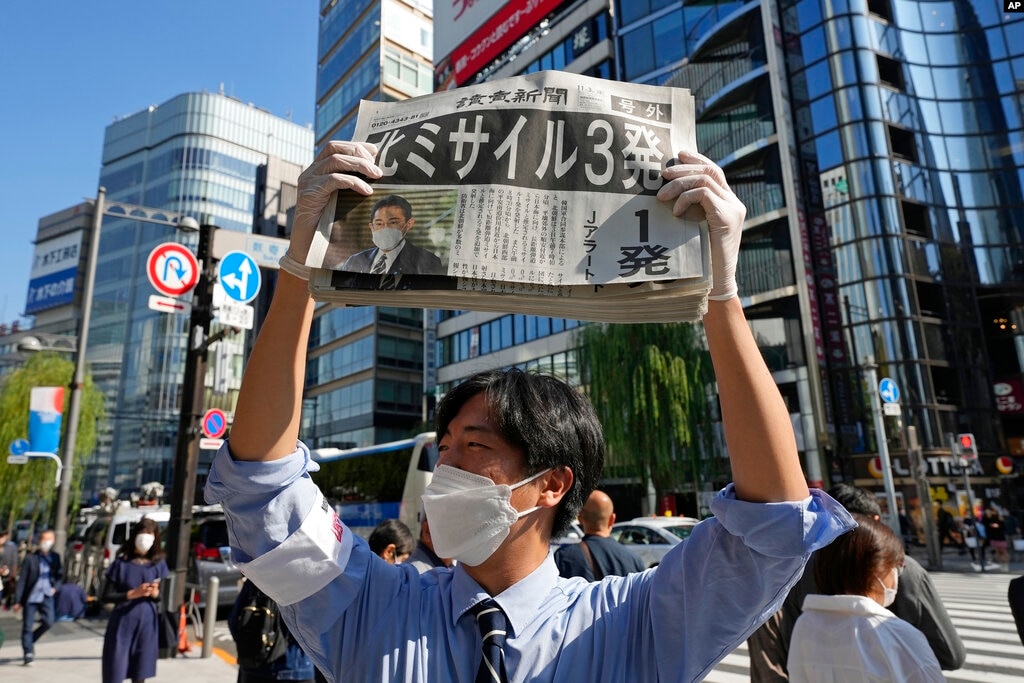 180 North Korean warplanes flying north of the military border over four hours on Friday were detected by radar. The North Korean aircraft flew north of the so-called tactical measure line, drawn to up 20 kilometres (12 miles) north of the Military Demarcation Line (MDL), South Korea’s military said in a statement.

U.S. and South Korean warplanes will continue large-scale joint military exercises for another day, officials announced Friday, as North Korea continued lashing out at the drills with a record pace of missile launches.

Since Wednesday, North Korea has launched 30 missiles, including some that triggered air raid alerts and emergency shelter orders in South Korea and Japan.

Nuclear. South Korea’s Minister of National Defense Lee Jong-sup speaks with B-52 crew members during a visit at Andrews Air Force Base in Maryland on Nov. 3, 2022.

The United Nations Security Council will meet Friday to discuss North Korea’s launches, at the request of countries including the United States.

Overnight, North Korea also launched 80 artillery rounds into a sensitive sea border area off its east coast, according to a statement by South Korea’s Joint Chiefs of Staff.

In Washington, the South Korean and U.S. defence chiefs vowed Thursday to increase their defense posture in response to North Korea’s tests.

South Korea has urged the United States to send more nuclear-capable warplanes and ships to the region, as North Korean leader Kim Jong Un ramps up missile tests and warns of his ability to conduct tactical nuclear strikes against the South.

“Any nuclear attack against the United States or its Allies and partners, including the use of non-strategic nuclear weapons, is unacceptable and will result in the end of the Kim regime,” Austin said, according to a joint statement issued after the meeting at the Pentagon.

The two leaders also visited a U.S. air base just outside Washington, where they posed with B-1B and B-52 bombers, the latter of which is nuclear-capable. During past cycles of tension, the U.S. has run those bombers across the Korean Peninsula in a show of force.

North Korea strongly objects to such displays. It also uses them as an occasion to show off its own weapons.

In a late-night statement slamming the extension of the U.S.-South Korean drills, a senior North Korean official blamed Washington and Seoul for bringing tensions to an “uncontrollable phase.”

“The U.S. and south Korea will get to know what an irrevocable and awful mistake they made,” said the statement by Pak Jong Chon, a senior official in North Korea’s ruling Workers’ Party.

North Korea has fired about 60 ballistic missiles this year, a record, by far. Its launches this week have been among its most provocative yet.

Japanese television broadcasts were also interrupted by emergency alerts, which initially said a North Korean missile flew over and past Japanese territory. However, defense officials later retracted that claim, saying they lost track of the missile while it was flying over the sea.