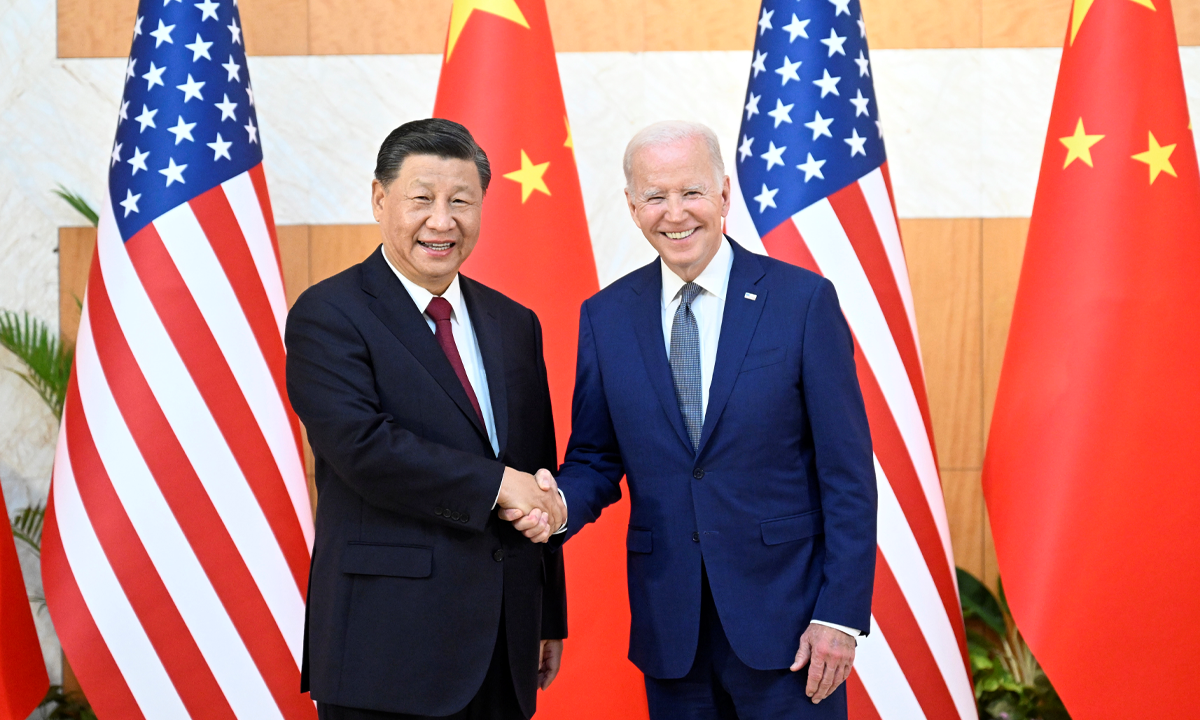 Chinese President Xi Jinping met with US President Joe Biden in Bali, Indonesia on Monday, which marking the first face-to-face meeting between the leaders of the world’s two biggest economies since Biden took office.

“Current state of China-US relations is not in the fundamental interests of the two countries and peoples, and is not what the international community expects.” Xi stated during the three hours and 12 minutes meeting.

Xi told Biden that as leaders of two major countries, they need to chart the right course and find the right direction for bilateral ties and elevate the relationship, according to Xinhua. Xi also stressed that the two countries should take history as a mirror and let it guide the future.

The two leaders consider that the meeting, is in-depth, candid and constructive, and they instructed the teams of the two countries to follow up the key consensuses reached by the two leaders, to take concrete actions to push the China-US relations return to a stable track for development, and the two leaders agree to keep contacts constantly, CCTV reported.

After a handshake, the two leaders walked into a spacious room together and delivered opening remarks that lasted over six minutes, with both stressing the importance of the face-to-face meeting.

Xi said that though the two leaders have maintained communication via video-conferences, phone calls and letters, but none of these can really take the place of face-to-face exchanges, according to the Xinhua News Agency.

Xi expounded on the 20th National Congress of the Communist Party of China (CPC) and its key outcomes, pointing out that the domestic and foreign policies of the CPC and the Chinese government are open and transparent, with clearly stated and transparent strategic intentions and great continuity and stability.

Biden said to Xi in front of the press before the close-door meeting that “China and the US can manage our differences, prevent competition from becoming anything ever near conflict, and to find ways to work together on urgent global issues that require our mutual cooperation.”

“The world expects, I believe, China and the US to play key roles in addressing global challenges,” he said.

Tensions over Taiwan soared in recent months, with Beijing scrambling fighter jets near Taiwanese airspace and firing missiles into nearby waters protesting a visit to Taipei by U.S. House of Representatives Speaker Nancy Pelosi in August.

The Chinese Ministry of Foreign Affairs said Xi asked Biden to honor his promise that the U.S. does not support Taiwan independence, nor does the U.S. have any intention to use Taiwan as a tool to contain China.

The Chinese readout said: “It is the common aspiration of the Chinese people to safeguard the unity and territorial integrity of the motherland. Anyone who wants to separate Taiwan from China is against China’s national interests. The Chinese people will never agree!”

Trading partners of Washington and Beijing are worried that tensions and a new U.S. semiconductor export ban could force nations to pick sides. Biden tried to reassure them, saying that despite tensions over the Taiwan Strait and other issues, Washington is committed to diplomacy.

“I absolutely believe there need not be a new cold war” with China, Biden said. “I made it clear we want Strait issues to be peacefully resolved.”

Biden said he has directed several top U.S. officials to meet soon with their Chinese counterparts. The two leaders also agreed that Secretary of State Anthony Blinken will visit China to follow up on their discussions.

Biden said, “We’re not going to be able to work everything out,” but he wanted to make sure there was “no misunderstanding about intentions or actions on each of our parts.”