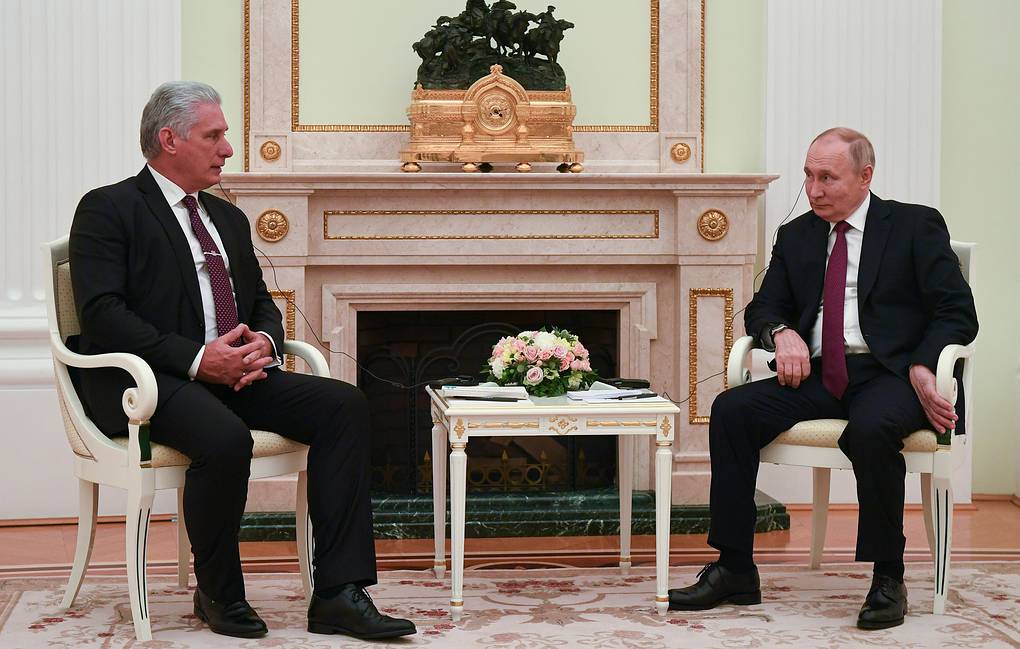 The Russian President Vladimir Putin and his Cuban counterpart Miguel Diaz-Canel in a solemn ceremony, Tuesday, opened the Castro monument located on Fidel Castro Square, at the intersection of Novopeschanaya and 2nd Peschanaya streets, in the Sokol metropolitan area of Moscow.

Work on the bronze-made three-meter-monument lasted for six months. Castro is depicted standing on a rock with a stylised map of Cuba inscribed on it. The image is supposed to reflect the heroic path of a person who stood up for the rights and freedoms of the Cuban people.

In his speech, Putin recalled that Castro was an outstanding statesman and political figure, the founder of the modern Cuban state.

“Fidel Castro dedicated his whole life to the selfless struggle for the triumph of the ideas of goodness, peace and justice. For the freedom of oppressed peoples, for a decent life for ordinary people and social equality. He is rightfully considered one of the brightest and most charismatic leaders of the stormy, dramatic 20th century.” said the President of Russia in his tribute.

Diaz-Canel expressed his gratitude to the Russian side and the sculptors for creating the monument. He noted that Castro had always had warm relations with the Soviet and Russian leaders, admired Russian cosmonauts Valentina Tereshkova and Yury Gagarin, the moral courage of the Soviet people during World War II, and valued Russia’s role in global politics. He called the Castro statue a tribute to the friendship between the two countries.

“The personality of the Commander-in-Chief is most closely connected with the friendship that has been tempered between our peoples and governments for more than 60 years. Fidel understood very well the essence of the brotherhood relations that unite our countries,” the Cuban president added.

Fidel Castro was one of the leaders of Cuba’s revolutionary movement who chaired Cuba’s Council of Ministers from 1959 to 2008. The Cuban politician passed away in 2016.

The initiative to erect a monument to Fidel Castro came from the leadership of the Russian Defense Ministry. The idea was supported by the Russian Military-Historical Society which held a closed artistic contest with 11 works participating.

The Cuban president arrived in Moscow on November 19 on a state visit, in later talks the Russian President shared his memories of the leader of the Cuban revolution, whom he had met in person on multiple occasions. Putin said he was invariably impressed by Castro’s deep immersion in the nuances of the world situation.

“My memories are still fresh of how impressed I was when we met for the first time at his office. It was a rather casual rendezvous. We had lunch together and discussed current world affairs. I was very surprised by his thorough knowledge of the details and nuances of what was happening around the world, in some cases quite far away from Cuba,”

As Putin recalled, Castro “knew and was able to analyze everything that was afoot in the world.”

“It was very interesting and useful for me to have these meetings,” he said. “I still remember the slightest details of our personal encounters with him. He was a bright man.”

Putin attributed the current good relationship between Moscow and Havana to what he described as “traditional friendship, the groundwork of which comrade Fidel Castro laid in his day.”

“Based on this solid foundation of friendship, we must, of course, bearing in mind the current realities, move on, and strengthen our cooperation,” the Russian leader stated. “I am very glad that we have such an opportunity.”