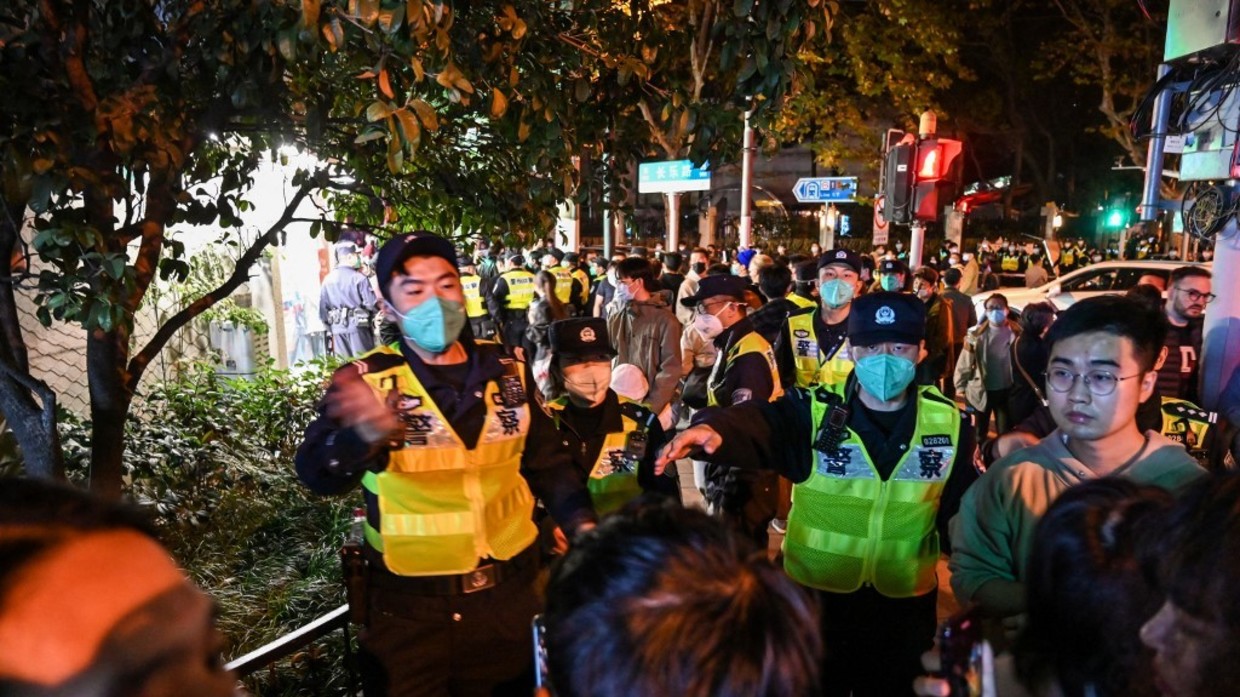 Protests rocked China this weekend, with demonstrators in Shanghai, Wuhan, Beijing and other locations demanding an end to the government’s stringent Covid restrictions. Videos shared on social media purportedly show some protesters calling for the downfall of the Chinese Communist Party.

Crowds in Shanghai voiced their anger for the second day in a row on Sunday, chanting anti-government slogans as ranks of masked police looked on. According to one Twitter account tracking the protests, the crowd shouted “Communist Party step down, Xi Jinping step down!”

People gather on a street in Shanghai on Nov. 27, 2022, where protests against China’s zero-COVID policy took place the night before following a deadly fire in Urumqi, the capital of the Xinjiang region.

Shanghai city officials imposed a two-month lockdown in March, confining more than 20 million people to their homes amid an uptick in coronavirus cases. Parts of the city went back into lockdown in late October, with residents ordered to remain at home until they could show a negative Covid-19 test result.

While the lockdowns have led to confrontations between citizens and police, mass demonstrations are rarely observed in China. The latest protests are believed to have started after an apartment block in Urumqi burned down, killing at least 10 people according to Western media reports. The city has been under lockdown since August, and the protestors have blamed Covid restrictions for hampering rescue efforts. City officials said on Saturday that they would roll back some of the restrictions.

Students in Beijing and Nanjing reportedly held vigils and demonstrations on Sunday, while video footage reportedly shows thousands of people demonstrating in Wuhan, the original epicenter of the virus. Like Shanghai, in late October it also returned to lockdown. One video, purportedly shot in Wuhan on Sunday, shows demonstrators kicking down barriers erected to maintain social distance.

By nightfall, video showed Shanghai police arresting protesters. It is unknown how many were detained, or whether similar arrests were made in other cities.

Xi’s government has been pursuing a strict zero-Covid policy since the coronavirus first emerged in Wuhan in late 2019, although local authorities have been given some latitude in how strictly measures like testing and school closures are enforced. Despite these policies, China recorded its highest ever number of daily Covid-19 infections on Wednesday, registering 31,444 new cases.

An American spy plane aggressively approached Chinese fighter jet Beijing says calling the Americans out for lying and trying to...