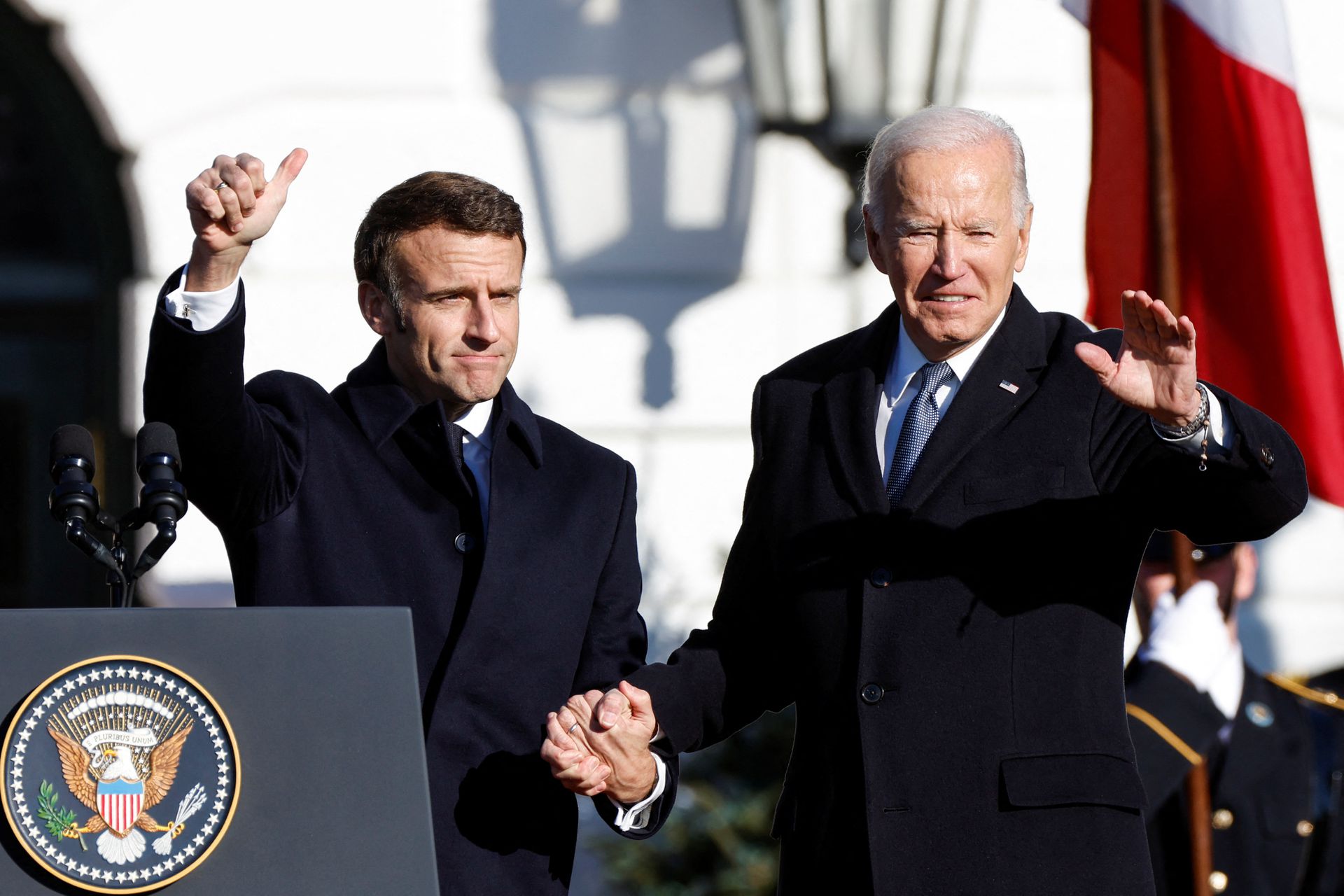 Biden waiting for Putin to call him as he hosts French President Emmanuel Macron on a state visit. Russia forces advance in Donbass. Lavrov warns against nuclear war

U.S. President Joe Biden and French President Emmanuel Macron sang from the same song sheet on Ukraine, Thursday at the White House, and Biden said he would talk to Russian President Vladimir Putin, if he was willing to end the invasion.

Biden has resisted talking to Putin since the Russian leader launched the invasion in February, while Macron has kept lines of communication with Putin open.

But Biden said he would only do this in consultation with his NATO allies and would do nothing that would harm Ukrainian interests. “I’m not going to do it on my own,” he said.

The two leaders said in a statement issued after their White House meeting, they reiterated “their steadfast resolve to hold Russia to account for widely documented atrocities and war crimes, committed both by its regular armed forces and by its proxies, including mercenary entities,” the statement said.

The Russian military reported new advances in the north of the Donetsk People’s Republic (DPR) on Wednesday. Multiple locations have been liberated on the outskirts of the town of Bakhmut, a major stronghold held by Ukrainian forces, which has seen intense fighting in recent weeks.

“On the Donetsk axis, the settlements of Belogorovka and Pershe Travnya of the Donetsk People’s Republic were completely liberated during offensive actions [by] Russian troops,” the Defense Ministry said in its daily briefing, adding that “up to 50 Ukrainian servicemen, four armored combat vehicles, three self-propelled artillery units and six soft vehicles were destroyed.”

The village of Belogorovka is a small settlement located some 20 kilometers northeast of Bakhmut. The second settlement mentioned in the briefing is, presumably, the village of Ozaryanovka, located about 12 kilometers south of the town. It was known by the name Pershe Travnya before 2016, but was then renamed under Kiev’s ‘decommunization’ efforts.

Later in the day, the Defense Ministry announced the liberation of Andreevka, a village five kilometers north of Ozaryanovka. The acting head of DPR, Denis Pushilin, said that troops have entered the adjacent village of Kurdyumovka. The settlements are located on an important supply route, crucial for the Ukrainian garrison of Bakhmut, he explained, referring to the town by its pre-‘decommunization’ name – Artemovsk.

“These settlements are extremely important because, after sweeping up Kurdyumovka, where the enemy is still resisting, [the troops] will reach the Artemovsk highway, severing the supply routes of the primary Ukrainian battlegroup,” Pushilin told broadcaster Rossiya-24.

On Thursday the Russian Foreign Minister Sergei Lavrov warned of the high risk of nuclear war breaking out and should not happen.

Аny war between nuclear powers is unacceptable. Еven if someone decides to start it using conventional means, there will be a huge risk of it escalating into a nuclear one,” Lavrov stated during a press conference on Thursday.

The diplomat was asked about Moscow and Washington’s joint efforts to reduce their strategic capabilities. Lavrov responded by pointing out that in September 2021 the US had essentially frozen the bilateral talks on reaching an agreement on the limitation of strategic offensive arms, long before Russia launched its military operation in Ukraine.

During Thursday’s press conference, Lavrov reiterated Moscow’s nuclear doctrine, under which the use of WMDs is permitted only as a retaliatory response to enemy nuclear strikes or to conventional strikes that put the Russian state at risk.