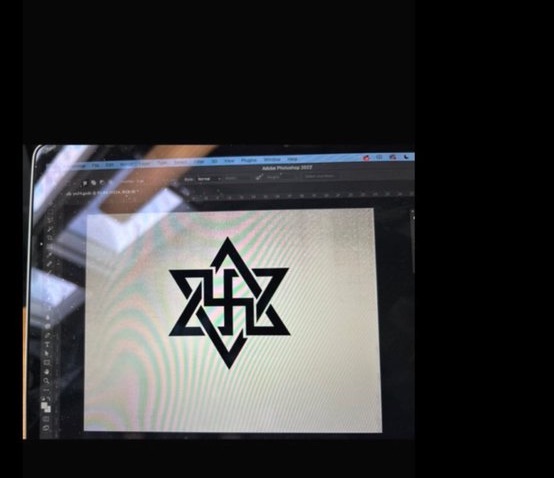 The Twitter account of Kanye ‘Ye’ West was suspended again on Thursday after the entertainer and failed 2020 US presidential candidate posted an image of the Star of David intertwined with a swastika which after investigation turned out to be a variant symbol of the Raelian movement.

The Raelian cult beliefs are centred on Unindentified Flying Objects (UFOs) and was founded in 1970s France by Claude Vorilhon, now known as Raël.

Raëlism teaches that an extraterrestrial species known as the Elohim created humanity using their advanced technology. An atheistic religion, it believes that the Elohim have historically been mistaken for gods. It claims that throughout history the Elohim have created forty Elohim/human hybrids who have served as prophets preparing humanity for news about their origins. Among those considered prophets are The Buddha, Jesus, and Muhammad, with Raël himself being the fortieth and final prophet.

Twitter had removed the tweet featuring the Raelian symbol a swastika inside the Star of David hours before West’s entire account was frozen. The combination of the two symbols was used by the Raelian Movement, which is focused on extraterrestrial life. Bearing a striking resemblance to the image tweeted by West, it supposedly represents space and time. Another variant was introduced in the 1990s, replacing the swastika with a swirling shape.

Owner Elon Musk, who reinstated West’s profile on free speech grounds after it was suspended in early October, said he didn’t appreciate the way the rapper had used his platform. In addition to posting the controversial image, West also posted an unflattering photo of Musk.

“This is fine,” Musk said of the image of himself, which West claimed would be his last on Twitter. “This is not,” he said of the other tweet.

West’s original suspension was over a tweet, in which he cryptically announced going “death con 3 on Jewish people,”which prompted a massive backlash and accusations of anti-Semitism.

This week, West made an appearance on the show of conspiratorial political commentator Alex Jones and made a number of remarks, which appeared to support the accusations against him. He said he liked Adolf Hitler, whom he credited with “inventing the highway” and the microphone, and the Nazis in general.

“Every human being has something of value that they brought to the table, especially Hitler,” West stated.

Before West’s account was suspended, he also declared support for fashion brand Balenciaga, which stands accused of using sexually suggestive images of children in an ad campaign. His other tweets included condemnations of pornography, calls to Jesus, and hints about another presidential campaign in 2024. The image that resulted in the suspension of his account was captioned “YE24 LOVE EVERYONE #LOVESPEECH.”

The embattled entertainer has previously spoken openly about his mental health issues and being diagnosed with bipolar disorder.

Musk, whom many critics accuse of having a fragile ego, stressed that he hadn’t taken offense to the shirtless photo of himself that West had posted. It was one of several taken while the entrepreneur was partying with Hollywood mogul Ari Emanuel on a yacht off the Greek island of Mykonos this summer. Musk claimed the photos had helped him resolve to lose some weight.