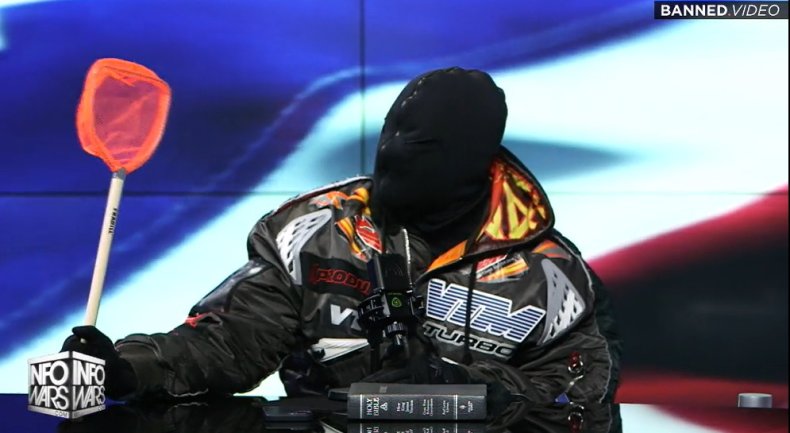 Rapper Kanye ‘Ye’ West has admitted he is an admirer of Adolf Hitler, telling Infowars host and conspiracy theorist Alex Jones that he “likes” the former Nazi leader and “sees good things” about him.

During a Thursday appearance on Jones’ Infowars show, West doubled down on his recent inflammatory comments about Jewish people, this time also offering praise for Hitler.

“But this guy [Hitler] that invented highways and invented the very microphone that I use as a musician, you can’t say out loud that this person ever did anything good.”

When Jones attempted to defend West’s past anti-Semitic comments, saying he was not a Nazi and does not “deserve to be demonized,” the rapper quickly rejected the help.

“I see good things about Hitler also,” he responded, while wearing a black hood covering his entire face.

Jones attempted to push back on the anti-Semitism, accusing the rapper of having a “little bit of a Hitler fetish.” When Jones clarified that he personally was not a Hitler fan, West responded simply: “I like Hitler.”

He went on to blame “the Jewish media” for making people think the Nazis and Hitler had not offered “anything of value” to the world.

At some junctures, Ye’s comments were so inflammatory that even Jones pushed back following several minutes of the rapper accusing Jews of being pedophiles.

“I think most Jews are great people,” Jones said. “But I agree there’s a Jewish mafia.”

You’ve got a bit of a Hitler fetish going on,” Jones added.

“It’s not a fetish,” Ye responded. “I just like information.”

“I do love Hitler, I do love the Zionists. I love everyone,” he said at another point in the interview. West appeared on the show alongside controversial right-wing commentator Nick Fuentes.

Fuentes appeared to downplay the Germans’ use of concentration camps, noting that the U.S. “had camps as well.” He then claimed there was a Jewish cabal running numerous facets of modern society, and that Ye’s comments did not cause any harm.

Ye also suggested that Democratic megadonor George Soros—a Jewish man who has become a boogeyman of the far right—could one day “come to Christ.”

“I don’t think Ye or I are saying that any group is particularly bad or that the Jews as a group are bad, but there are Jewish practices that are based on Jewish law, and there is clearly some kind of a Jewish mafia,” Fuentes claimed.

West has been under fire in recent weeks over his incendiary remarks about Jews, including declaring in October that he was going “death con 3 on Jewish people.” The comments prompted a massive backlash that saw a slew of brands like Adidas and Gap to cut ties with him.

The outcast rapper confirmed last week that he would be making another run for the US presidency in 2024. He previously ran as an independent candidate in 2020, but conceded after receiving only 50,000 votes.

He also claimed this week that the US Internal Revenue Service (IRS) had frozen his bank accounts and told him he owes about $50 million in taxes.