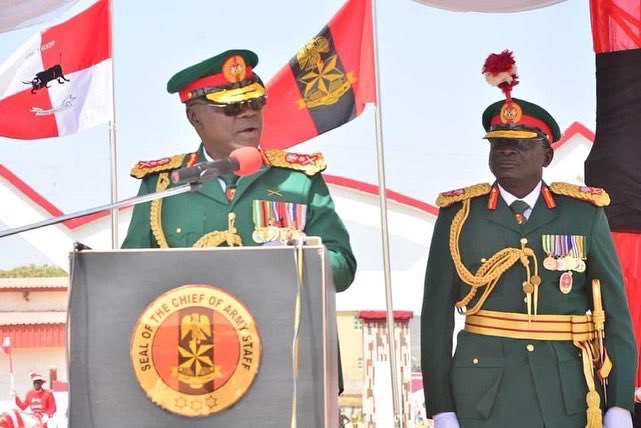 The Nigerian Army has added 6000 trained troops to its ranks following a passing out parade attended by the Chief of Army Staff (COAS) Lieutenant General Faruk Yahaya at the training centre in Zaria, Kaduna on Saturday. The training centre officially known as Depot NA since its establishment in 1924 to train colonial troops has been the premier school for army training.

In his speech at the passing out parade, Yahaya urged the new soldiers to be fully prepared to defend the country and constitution as the nation heads into a crucial election in 2023.

“I urge you to be focused and not to allow ethnic and religious bigots to use you in advancing their selfish agenda.”

He also charged the young soldiers who would be deployed for the 2023 elections security duties to be apolitical while discharging their constitutional responsibility. He reminded the young soldiers the core values of the army; loyalty, selfless service, integrity, courage, discipline and respect for others.

“You are expected to uphold these values by displaying high professional and moral standards. I, therefore, urge you to retain the mental, physical and moral training you received and display it most responsively and professionally”. the army chief stressed.

Lauding their capabilities as new military professionals, he commended the results-oriented training that impacted them in their five months training which was evident in the synchronised drill, impressive display, innovation, ingenuity, turn out, and perseverance on parade.

The army over the years have been graduating almost 5000 soldiers annually enhancing the military’s capability in mounting offensive and defensive operations. But critics say the current strength of 156,000 personnel is not enough to tackle the numerous threats facing the nation.

General Yahaya further stated that to promote retention in the service he will be focusing on further developing the Depot’s infrastructure so as to improve the welfare of the drill instructors and students.

On administering the Oath of Allegiance to the 1999 Constitution he warned the new soldiers that they are subject to both Military and Civil laws.