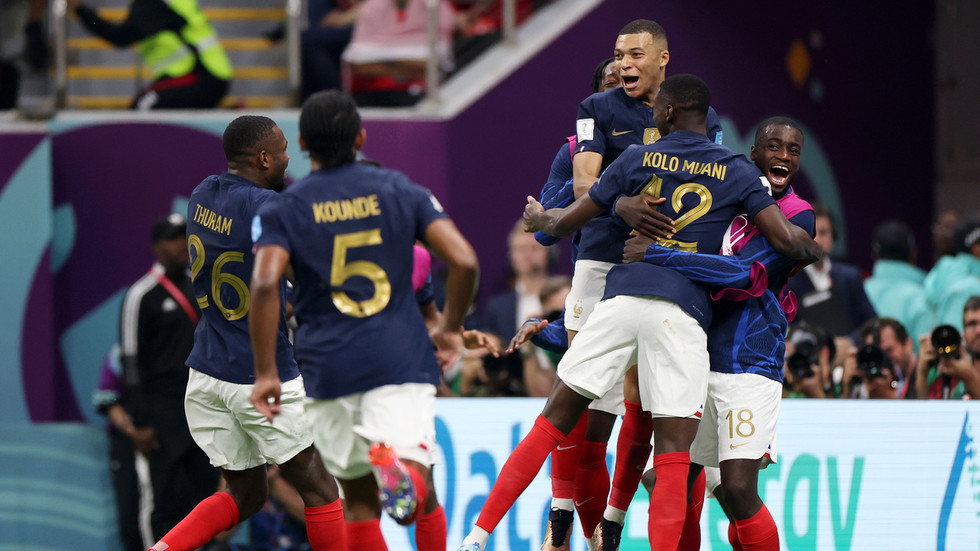 France booked a place in the World Cup final against Argentina in Qatar after beating Morocco 2-0 with goals from Theo Hernandez and Randal Muani at the Al-Bayt Stadium on Wednesday.

Perhaps fortunate due to the slew of chances enjoyed by Morocco, Les Bleus showed champions’ mettle as they managed to carve out a win on the back foot as they had done against England in the quarterfinals.

With their victory, the Russia 2018 kings are the first team to reach back-to-back World Cup finals since Brazil in 1998 and 2002.

As for Morocco, making history as the first African and Arab semi-finalists in tournament history, they can hold their heads high after putting on another gutsy display against strong European opposition.

France had a lucky break early in the match when a slip in Morocco’s back line allowed Antoine Griezmann to break free and pass into the box to Kylian Mbappe.

The Atlas Lions tussled with the Paris Saint-Germain superstar and managed to block his shot, but the ball broke free to left back Lucas Hernandez who smashed a bouncing half-volley past Yassine Bounou on five minutes.

France came close again when Olivier Giroud clipped Bounou’s post on 17 minutes. After that, though, it was pretty much all Morocco with Jawad El Yamiq’s stunning overhead kick that hit Hugo Lloris’ post on the stroke of half time the best of numerous opportunities.

In the second half, it was business as usual as the fearless Moroccans took the game to their foe.  Substitute Selim Amallah scuffed a shot in the area approaching the hour mark, and two decent crosses were either too high or unable to meet their targets in Youssef En-Nesyri and Zakaria Aboukhlal.

Player of the tournament candidate Nordin Amrabat delivered a crunching tackle on an off-key Mbappe, who was relatively quiet once more as he had been against England, around this time in the tie.

Noticing that Mbappe was not tracking back and marking his PSG teammate Achraf Hakimi on the right flank as dangerous balls continued to fly in from the wings, France coach Didier Deschamps was smart to bring off Giroud and replace him with Marcus Thuram.

Putting Thuram on the left wing, Deschamps moved Mbappe to a central striker’s role that proved vital to wrapping up the tie.

The scorer of France’s first goal in a 2-1 win over England last time out, Aurelien Tchouameni carved Morocco up with a run from midfield and found Mbappe.

Mbappe exchanged slick passes with Thuram, and then shot. Again with luck on their side, the French saw the ball spill to Randal Muani to tap in on 79 minutes and double the lead.

Deep into stoppage time, Morocco had a shot blocked on the line by Jules Kounde after he had previously seen FC Barcelona colleague Ez Abde dribble past him with ease on the same move.

It wasn’t Morocco’s night, and the ball wouldn’t go in. As France held on for the win and celebrated with their fans, they now have another chance to match the Brazilians in the history books.

Should they get past the South Americans’ cross-border rivals Argentina on Sunday, they will become the first team to clinch back-to-back titles since the Selecao did it in 1958 and 1962 with Pele.