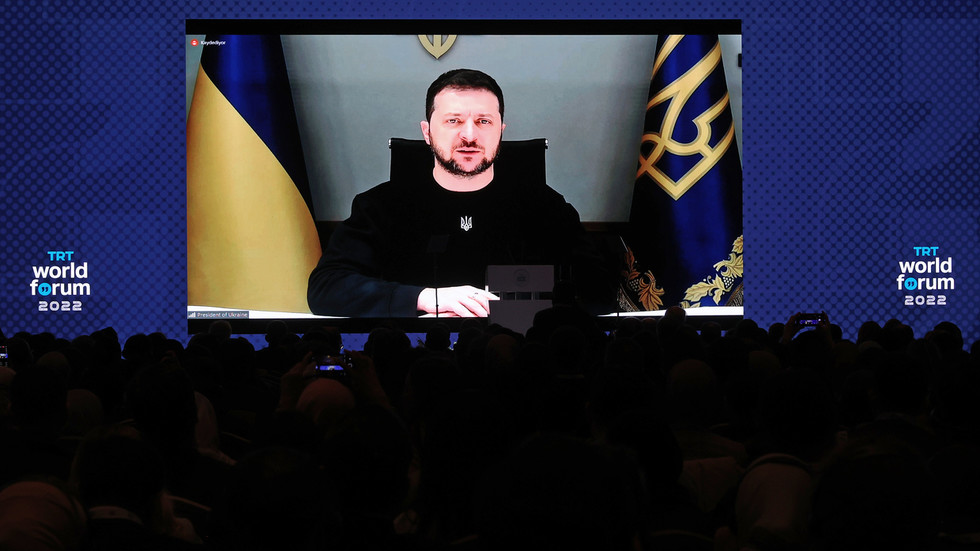 World football governing body FIFA has turned down a request by Ukrainian President Vladimir Zelensky to appear via video link ahead of the World Cup final in Qatar on Sunday, according to CNN.

Zelensky is said to have offered to share a message of “world peace” before the game between defending champions France and Argentina at the Lusail Stadium, which is set to be watched by hundreds of millions around the world.

CNN reports that the plea was dismissed by FIFA, leaving Zelensky’s office “surprised by the negative response.”

Talks are said to be ongoing between FIFA and Ukraine despite the apparent snub, and it is unclear if the message would have been live or pre-recorded.

FIFA has been forced to tackle the issue of politics infringing on football throughout the tournament in Qatar.

Ahead of kick-off, several European teams vowed that their captains would wear ‘One Love’ armbands in support of LGBT rights and other causes.

They were forced to back down under threat of sanction from FIFA, which announced its own array of messages for the tournament, including “no discrimination” and “football unites the world.”

FIFA had urged teams to “focus on the football” in Qatar in a letter addressed to the 32 competing nations before the tournament.

The Ukrainian request for publicity is perhaps unsurprising given the lengths to which Zelensky and his office have gone to garner attention for their cause amid the conflict with Russia.

The Ukrainian leader has even made video addresses to events such as the Grammy Awards in the US.

In sporting terms, Zelensky met with International Olympic Committee (IOC) president Thomas Bach in Kiev earlier this year, and shared a phone call with him again this week.

FIFA’s apparent stance on keeping politics out of football comes despite a ban imposed on all Russian teams from its competitions, which has been in place since the end of February.

The sanctions deprived the Russian team of the chance to qualify for the Word Cup in Qatar.

On the eve of the tournament, FIFA president Gianni Infantino also used an appearance at a G20 summit to call on Russia and Ukraine to consider “a temporary ceasefire for one month for the duration of the World Cup, or at least the implementation of some humanitarian corridors or anything that could lead to the resumption of dialogue as a first step to peace.”

Russia was the successful host of the last edition of the FIFA World Cup in 2018, which culminated in the final attended by dignitaries including Infantino and Russian President Vladimir Putin in Moscow.