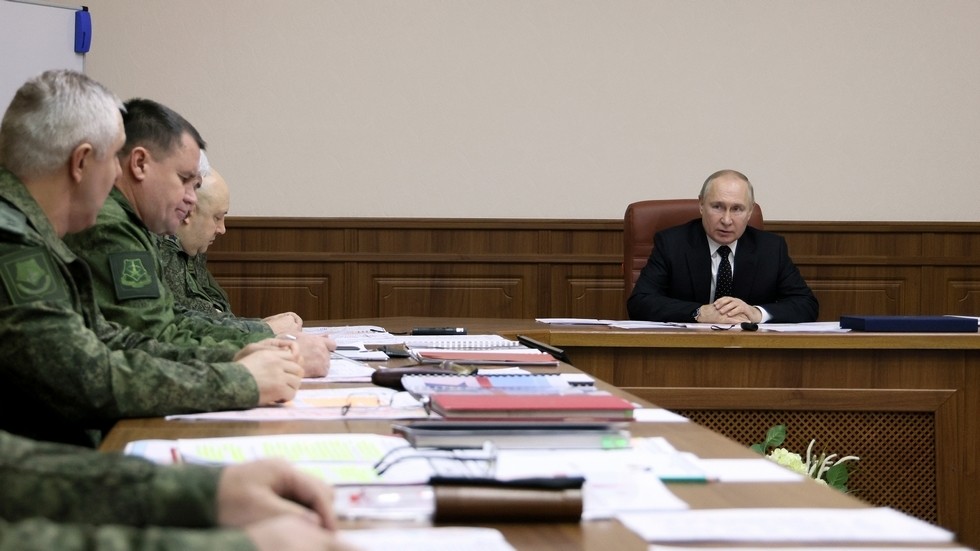 Russian President meets with military brass involved in the special military operation at an undisclosed location.

Russian President Vladimir Putin has sat down with the country’s top military commanders to discuss the Ukraine conflict, the Kremlin revealed on Saturday. The agenda revolved around Moscow’s actions in the short and medium term.

The meeting comes after Putin’s warning last week that the military operation in Ukraine “might be a lengthy process.”He noted, however, that Russia had secured several major gains, referring to the Donetsk and Lugansk People’s Republics, which, along with Kherson and Zaporozhye Regions, voted to join Russia in referendums this autumn. Ukraine and the West have condemned the referendums as illegitimate.

According to the Kremlin’s readout of the meeting, “throughout Friday, the president worked at the joint headquarters of the military branches involved in the special military operation.” It did not provide details on where the meeting took place.

Putin heard reports on the work of the military HQ and the campaign’s progress in Ukraine. The Russian leader also held a joint conference and separate meetings with the commanders.

Tactical brief. Minister of Defence Sergei Shoigu and Commander of the Joint Group of Forces in the Special Operations Zone, General of the Army Sergei Surovikin (left).

Photos released by the Kremlin show the meeting was attended by Russian Defense Minister Sergey Shoigu, General Valery Gerasimov, who serves as chief of the General Staff, and General Sergey Surovikin, the commander of Russian forces in Ukraine.

A video clip posted by the Kremlin on Telegram features Putin’s opening remarks at the conference. “We will listen to the commanders in each operational area, and I would like to hear your proposals regarding our immediate and medium-term actions”, the president said.

According to RIA, the Russian Defense Ministry “received another batch of the advanced 1B76 Penicillin acoustic and infrared reconnaissance systems,” adding that the device “effectively detects the positions of the Ukrainian artillery and transmits coordinates for their prompt destruction.”

Another source earlier told the agency that Penicillin artillery trackers had proved their worth in the Ukraine conflict, as they are able to target, among other things, NATO-grade artillery.

The reconnaissance system can also detect rocket and air defense systems, and register acoustic and infrared waves. This provides the operator with precise coordinates to pinpoint the adversary’s firing positions. The time needed to locate a single target does not exceed five seconds.

Another major advantage of ‘Penicillin’ is that it does not rely on radio waves, making it immune to electromagnetic warfare and impossible to detect by radio-technical means. The hardware was developed and produced by the R&D enterprise ‘Vektor,’ which is part of the Russian state-owned holding company Ruseletronics.

The new delivery comes as Moscow boosts its efforts to supply its military with all necessary equipment for the Ukraine conflict. On Friday, Andrey Vetluzhskykh, the head of the Trade Union Federation in the Sverdlovsk Region of Russia’s Urals, said defense enterprises had switched to a six-day working week.

Last week, former Russian President Dmitry Medvedev, who now serves as deputy chairman of Russia’s Security Council, claimed that Russia was “increasing the production of the most powerful weapons and munitions,” including those based on “new principles,” to deter countries which are supporting Ukraine in its fight with Russia.