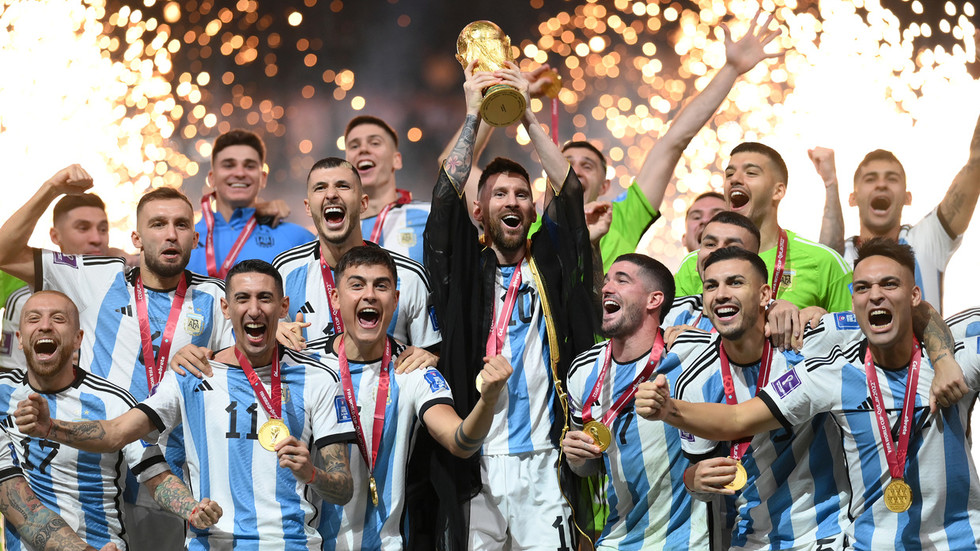 Lionel Messi captained Argentina to World Cup glory on a night of high drama as his team overcame defending champions France on penalties after a thrilling game ended 3-3 at the Lusail Stadium in Qatar.

Argentina roared out of the blocks to take a two-goal lead in the first half thanks to a penalty from Messi and a strike from Angel Di Maria.

But two late goals from French forward Kylian Mbappe sent the game to extra time, where both Messi and Mbappe scored again.

And in the ensuing penalty shootout, it was Gonzalo Montiel who fired home the winning spot kick to secure Argentina’s first World Cup since 1986 and their third title in total.

It was the 4th encounter between France and Argentina at the FIFA World Cup. Argentina came out victorious in 1930 and 1978 (1-0; 2-1 respectively), while France defeated Argentina 4-3 in Russia’s Kazan at the 2018 World Cup in the round of 16.

It was agony for Didier Deschamps’ French team, who had been bidding to become the first nation since Brazil in 1962 to retain the trophy.

Early on at the Lusail Stadium, it didn’t appear that penalties would even be a remotely realistic possibility.

Hit by a virus in the build-up to the game, the French team were unusually lackluster in the opening half, failing to register a single shot (or even a touch in the Argentine penalty box) in the opening 45 minutes.

They were punished for their slow start by falling behind to Messi’s penalty in the 23rd minute after Ousmane Dembele was adjudged, perhaps softly, to have brought Di Maria down inside the box.

Argentina’s second was a goal very much befitting the occasion when Di Maria finished off a sublime move to fire past French skipper Hugo Lloris to put his side in the driving seat to deliver their first World Cup win in 36 years.

France, though, refused to throw in the towel and Mbappe’s late intervention dragged the thrilling spectacle to extra time after he struck twice in the space of two minutes – the first from the penalty spot in the 80th minute and the second a sensational half-volley soon afterwards.

In extra time, the two box office stars of the showpiece fixture – first Messi and then Mbappe – each found the net to bring the game to penalties.

Messi’s strike came from close range as he turned in a shot to record his seventh goal of the tournament.

But again it was Mbappe who pegged Argentina back, making no mistake from the penalty spot after Montiel had blocked a shot from the French striker with his forearm inside the box.

Mbappe’s late intervention was his eighth goal in Qatar, and ensured that he became the first player to score a World Cup final hat-trick since 1966.

But his heroics were to prove in vain as France failed in the shootout.

Kingsley Coman had his penalty saved by Argentina goalkeeper Emiliano Martinez and after Aurelien Tchouameni missed his effort, the duty fell upon Montiel to shoulder the responsibility of the winning penalty for Argentina.

As a nation held its breath, Montiel fired to Lloris’ left to win the shootout 4-2 for Argentina, breaking French hearts and sending the Albiceleste fans at the Lusail Stadium into a frenzy.

Lionel Scaloni’s Argentina team had begun their campaign in Qatar with a stunning defeat to Saudi Arabia, but ended it as only the second ever nation – after Spain in 2010 – to lose their first match but still go on to win the tournament.

Under the stewardship of Scaloni, 44, Argentina have now ended lengthy droughts in both the Copa America and World Cup in the span of 18 months, and he ensured his name will be permanently enshrined in the annals of world football.

As for the French, even the artistry of Mbappe – whose eight goals ensured he won the Golden Boot – wasn’t enough to prevent Argentina’s win, and his World Cup ended in a solemn embrace with French President Emmanuel Macron, who was tasked with glumly distributing the losers’ medals.

Mbappe, though, will likely have further opportunities on football’s grandest stage. And maybe next time, Les Bleus will have a full compliment of players at their disposal after injury deprived them of some of their biggest names at the tournament.

Messi, meanwhile, was crowned player of the tournament minutes after Montiel’s winning penalty, as he also became the all-time record appearance maker at the World Cup with 26 matches at the competition.

Aged 35, Messi had already proclaimed that this would be his World Cup swansong. In the end, it was a fitting final act for one of the sport’s giants, and firmly stands him alongside the late Diego Maradona in the pantheon of the game’s greatest players.