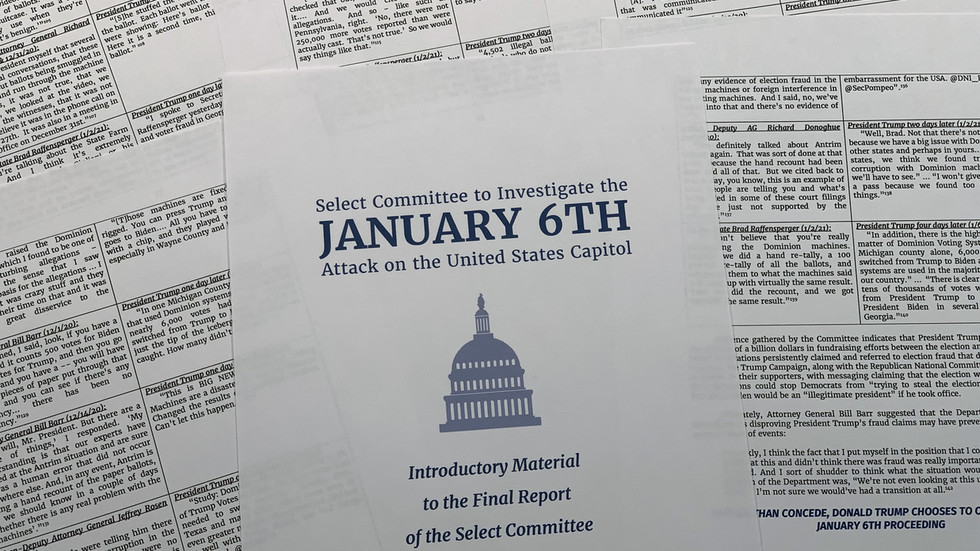 Former US President Donald Trump dismisses the Democrat led panel insurrection charge referral to the DOJ challenges the FBI to come get him.

Former President Donald Trump, who last month announced another run for the White House in 2024, has dismissed the January 6 committee’s “recommendation” to the Justice Department to prosecute him as a witch hunt and an attempt to undermine his campaign.

“The people understand that the Democratic Bureau of Investigation, the DBI, are out to keep me from running for president because they know I’ll win and that this whole business of prosecuting me is just like impeachment was – a partisan attempt to sideline me and the Republican Party,” Trump said in a post on his Truth Social platform on Monday.

The January 6 committee, made up of seven Democratic members of Congress and two Republican opponents of the former president, voted unanimously earlier on Monday to adopt a report “recommending” that Trump be charged with defrauding the US, making false statements, obstruction, and inciting an “insurrection” on Capitol Hill.

“The Fake charges made by the highly partisan Unselect Committee of January 6th have already been submitted, prosecuted, and tried in the form of Impeachment Hoax # 2. I WON convincingly. Double Jeopardy anyone!” Trump wrote in response, adding that “these folks don’t get it that when they come after me, people who love freedom rally around me.”

It is now up to the Justice Department to decide whether to prosecute Trump, as referrals by Congress are merely recommendations. The committee, however, insists that their inquiries and televised hearings over the past 18 months have uncovered “more than sufficient evidence” for a criminal referral of Trump for his alleged role in inciting the riot by his supporters that interrupted the certification of Joe Biden’s electoral victory last year.

An official insurrection charge could bar Trump from running for office again, and one of the panel’s two Republicans, Rep. Adam Kinzinger, hinted that the move will define Trump’s political future. “We now turn to the criminal justice system to ensure Justice under the law,” he wrote. “The American people can ensure he’s never elected again.”