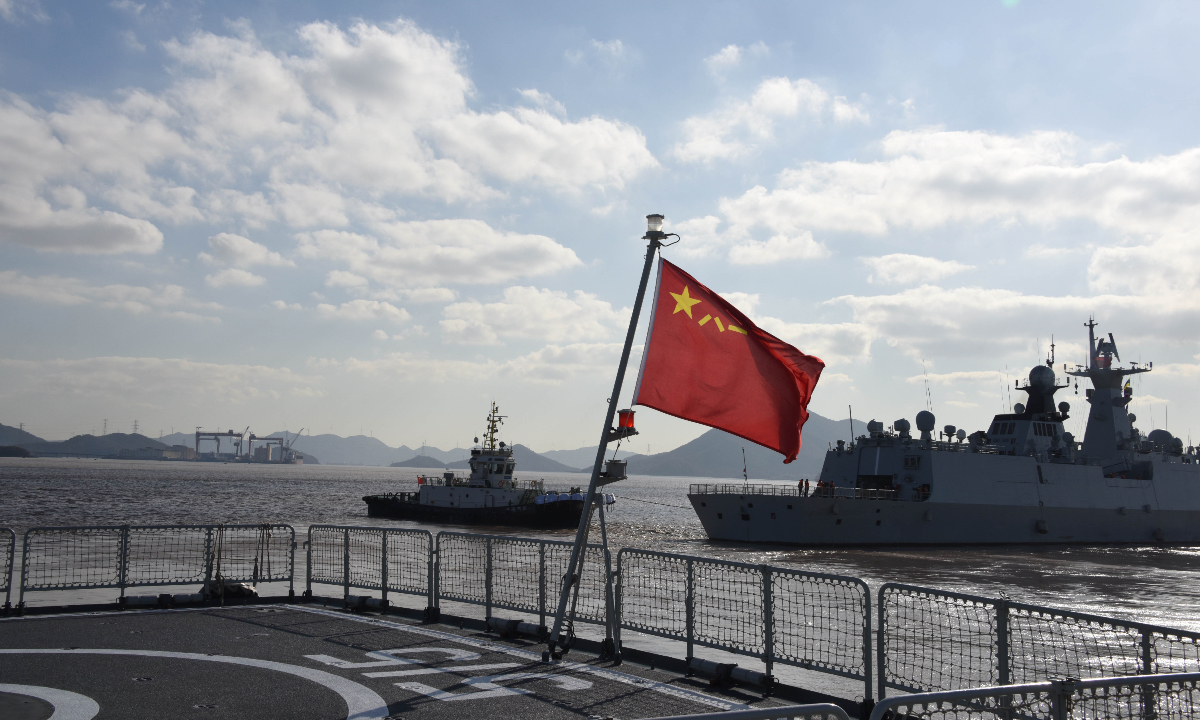 China and Russia will hold a week-long joint naval drill in the East China Sea starting Wednesday, in a move that displays the two countries’ capabilities in tackling maritime security threats and safeguarding peace and stability at a complicated time when the US keeps promoting its “Indo-Pacific Strategy” and Japan has breaking away from its defense-only principle, thereby instigating tensions in the Taiwan Straits.

Based on the annual military cooperation schedule between the Chinese and Russian armed forces, the navies of the two countries will hold the Joint Sea 2022 military exercise in the waters east of the coastline stretching from Zhoushan to Taizhou, East China’s Zhejiang Province from Wednesday to December 27, China’s Ministry of National Defense said in a press release on Tuesday.

The joint exercise aims to display the two sides’ determination and capability in strengthening efforts to jointly deal with maritime security threats, as well as safeguard international and regional peace and stability, and to further deepen the China-Russia comprehensive strategic partnership of coordination for a new era, the Chinese Defense Ministry said.

Russia’s Ministry of Defense said in a press release on Monday that the main goal of the exercise is to strengthen naval cooperation between the two countries and maintain peace and stability in the Asia-Pacific region.

Joint naval exercises between China and Russia have become regular and routine, observers said. Last year, the Joint Sea 2021 was held in the Sea of Japan off the coast of Russia in waters near Peter the Great Gulf, and this year they have moved to the East China Sea off the coast of China. Previously there were also drills in places like the Yellow Sea.

The Joint Sea 2022 is also not the first joint naval operation between China and Russia this year. In September, after participating in the Russia-led Vostok-2022 strategic drills, a PLA Navy flotilla joined Russian warships in a joint naval patrol in the Pacific Ocean. The two navies have carried out two such joint patrols since 2021.

The latest joint drill, set in the East China Sea neighboring the island of Taiwan and Japan, comes at a time when Japan recently revised its defense strategies, breaking away from its strictly self-defense-only postwar principle and declaring plans to possess preemptive strike capability and cruise missiles.

Also, Western officials have continuously visited the island of Taiwan to provoke China on its core interests after US House Speaker Nancy Pelosi’s visit in August, and with the US continuing to sell arms to the island, tensions in the Taiwan Straits remain high.

The US Navy’s Nimitz carrier strike group was set to arrive in waters northeast of Guam by Tuesday, as it is expected to start a routine deployment in the West Pacific, taking the place of the USS Ronald Reagan aircraft carrier.

The Chinese participating forces are from the People’s Liberation Army (PLA) Eastern and Northern theater commands, including the Type 052D destroyer Baotou, the Type 052C destroyer Jinan, the Type 054A frigates Binzhou and Yancheng, the Type 903A comprehensive supply ship Gaoyouhu, as well as a submarine, fixed wing early warning aircraft, anti-submarine patrol aircraft and vessel-borne helicopters, said Senior Captain Gao Xiucheng, a spokesperson of the PLA Navy, in a statement on Tuesday.

According to the Russian press release, the Russian Navy will be represented by the guided missile cruiser Varyag, the frigate Marshal Shaposhnikov and the Project 20380 corvettes Hero of the Russian Federation Aldar Tsydenzhapov and Sovershennyy, as well as aircraft and helicopters of the naval aviation forces of the Russian Pacific Fleet.

In Beijing, Dmitry Medvedev, the former president of Russia and current deputy chair of the Security Council, met with Chinese President Xi Jinping on Wednesday.

Medvedev’s office said that during his meeting with Xi he delivered a personal message from Russian President Vladimir Putin, according to Russian media. Xinhua said it contained friendly greetings and best wishes to Xi, who asked his guest to convey his response in kind to the Russian leader.

In a brief statement about the nature of the meeting, Medvedev said he and his Chinese host discussed intra-party cooperation, among other things. Xi was re-elected as secretary general of the Communist Party of China in October. Medvedev leads the ruling United Russia party.

China’s president hailed contacts between the two parties as a unique platform for building political trust between the nations, according to a statement carried by Xinhua.

Speaking about the situation in Ukraine, Xi reiterated China’s call for restraint by all parties and urged them to find a peaceful resolution. He expressed hope that the conflict could be ended through political means.

According to Xinhua, Medvedev said that events remained complicated but that Moscow was willing to resolve them through peace talks.