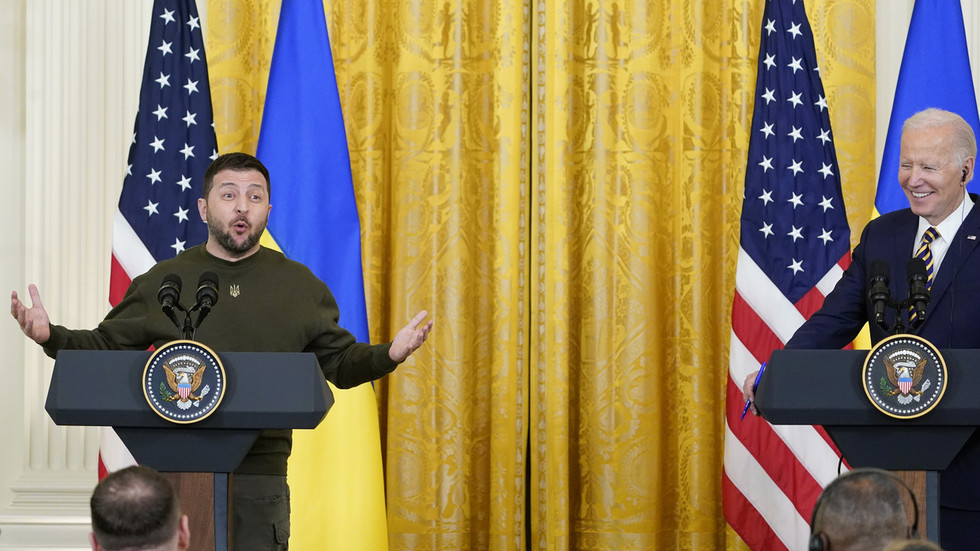 Providing Ukraine with offensive weapons risks breaking up Europe, NATO and the world Biden says at press conference with Zelensky.

The embattled President of Ukraine Vladimir Zelensky arrived Washington DC Wednesday after leaving Kiev by train in tight secrecy accompanied by the US ambassador to Ukraine Bridget Ann Brink acting as chaperone. They arrived in Przemysl, Poland near the Polish-Ukrainian border and drove in a 4×4 convoy to Rzeszow airport, a Polish Air Force Base where a US Air Force Boeing C-40B Clipper a military version of the 737 codenamed SAM910 was waiting.

Escorted over the North Sea by a US F15-E Strike Eagle fighter as it flew from Rzeszow airport, Poland, to Joint Base Andrews, half an hour from the White House. The fighter returned to its base at RAF Mildenhall, Suffolk. The route had been scouted by a US surveillance plane in advance.

Welcome to the United States. Rufus Gifford Protocol Officer of the US greets the Ukrainian President

US National Security Council spokesman John Kirby revealed on CNN This Morning on Wednesday, ahead of Zelensky’s surprise visit to Washington, DC that US President Joe Biden and Ukrainian President Vladimir Zelensky are set to discuss continued American aid to the country, as well as how the ongoing military conflict between Kiev and Moscow might end.

“I have no doubt they are going to talk about President Zelensky’s notion of a ‘just peace’ and what that looks like, what are the components of that, and how do we help Ukraine get to that point,” Kirby said.

Moscow, however, is “not interested in diplomacy right now,” Kirby claimed.

Welcome to the White House

“The president really believes that as we approach winter, as we enter … a new phase in this war, of Mr. Putin’s aggression, that this is a good time for the two leaders to sit down face to face and talk,” Kirby said. Zelensky, 44, surprise visit seems to be the first foreign trip the Ukrainian president has taken since the beginning of the ongoing conflict in late February.

At a White House press conference with Zelensky, Biden said giving Kiev all the weapons it wants might break NATO, US President Joe Biden said in a joint appearance with his Ukrainian counterpart Vladimir Zelensky in Washington on Wednesday. Biden added he was not worried the delivery of Patriot missiles to Ukraine might escalate tensions with Russia – as Moscow has warned – because they’re “defensive”weapons.

Biden and Zelensky answered the questions of four hand-picked reporters after their meeting at the White House. The last one came from a Ukrainian journalist who asked why the West simply doesn’t give Ukraine “all capabilities it needs to liberate all territories.”

“His answer is yes,” the US president deadpanned, pointing to Zelensky, who replied “I agree,” to laughter from the gathered press.

Biden then pointed out that the US “dedicated an enormous amount of security assistance to Ukraine” even before hostilities escalated in February – though in his prepared remarks he called the Russian military operation “unprovoked and unjustified.”

“We’ve given Ukraine what they needed when they needed to defend themselves,” the US leader insisted, listing hundreds of tanks, armoured vehicles, artillery, and ammunition that Washington and NATO have handed over to Kiev.

Doing more would have “the prospect of breaking up NATO, breaking up Europe, and the rest of the world,” Biden said, noting that he’s spent “hundreds” of hours persuading US partners around the globe to help Ukraine, but “they are not looking for a Third World War” by fighting Russia directly. “But I’ve said too much.”

Zelensky arrived in Washington in what US media described as a secretly arranged visit, though word of it was leaked to select outlets on Tuesday. He is expected to address Congress in the evening, urging the passage of a $1.7 trillion spending bill that includes $45 billion earmarked for Ukraine in 2023. In a video released on Tuesday, he said Ukraine was grateful for all the aid from the West but it was “not enough.”

A battery of Patriot air defense missiles is among the $1.85 billion in military aid for Ukraine the Pentagon announced earlier in the day, though Biden pointed out that training Ukrainian troops to operate them, which is to take place at a US base in Germany, is “going to take some time.” Zelensky said that once the Patriots arrive, he will ask Biden for more of them.