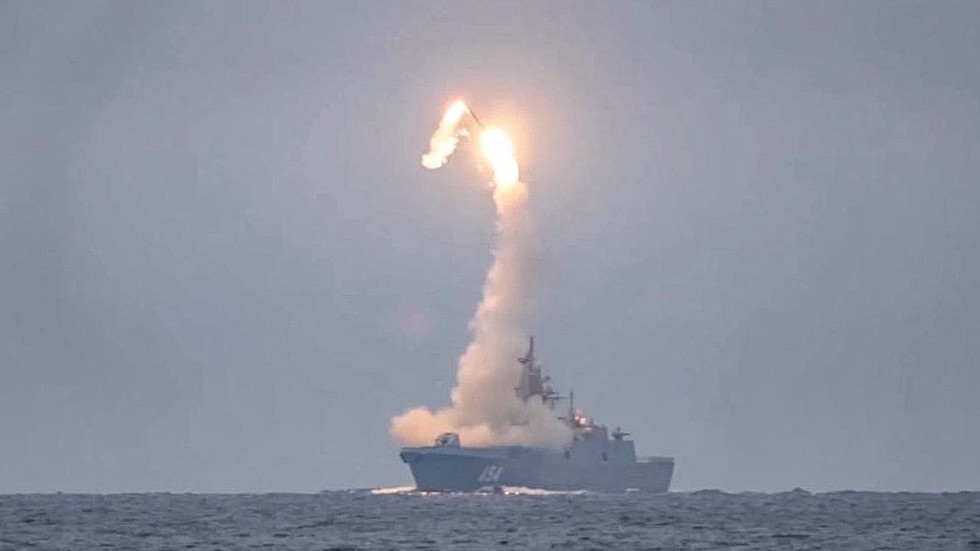 Russia is facing nearly the entire military potential of NATO in the ongoing conflict in Ukraine, President Vladimir Putin said on Wednesday during an extended meeting of the Board of the Ministry of Defense.

War room. Russian President Vladimir Putin delivers a speech during an expanded meeting of the Russian Defence Ministry Board at the National Defence Control Centre in Moscow, Russia. ©  Sputnik/Sergey Fadeichev

The Russian president also commented on what led up to the current conflict with Kiev and noted the importance of modernising the country’s nuclear potential in order to maintain sovereignty.

“In early January next year, the Admiral Gorshkov frigate will enter combat service with the latest, I repeat once again, not having any analogues in the world, sea-launched Zircon hypersonic missile systems,” Putin stated.

The new hypersonic missiles, officially known as the 3M22 Zircon, have been actively tested over the past few years, after first being announced by Putin back in 2019. The Admiral Gorshkov, a modern missile frigate with Russia’s Northern Fleet, has already performed multiple test launches of the new missiles.

Shoigu announced the need to make a number of structural changes to the country’s armed forces in light of NATO’s attempts to bolster its presence on Russia’s border and expand its membership to Finland and Sweden.

During a Russian Defense Ministry meeting on Wednesday, Shoigu proposed a number of measures to strengthen the security of the Russian Federation, including creating a special grouping of troops on the country’s northwestern border and expanding Russia’s armed forces to amount to 1.5 million servicemen in total, with some 695,000 of them being contract soldiers.

Shoigu’s comments come as Helsinki and Stockholm have submitted bids to join NATO, citing a perceived threat from Russia in light of its ongoing military operation in Ukraine. Their accession to the US-led bloc is currently stalled by Türkiye and Hungary, but all other members have already welcomed their membership.

The minister also offered to “gradually” change the minimum draft age in Russia from 18 to 21 and raise the maximum age to 30, while also offering all draftees the opportunity to sign a contract with the army from the first day of service.

Russian President Vladimir Putin, who also attended the meeting, approved the proposals for improving the country’s armed forces and instructed Shoigu to report back once these measures are deliberated with the ministerial board. Putin promised to address these proposals in detail later.

On Thursday, Shoigu inspected the conditions of Russia’s forces and military equipment at deployment points and held talks with unit commanders, paying special attention to how support for the soldiers was being organized in the field.

The minister also inspected the medical units and reviewed the accommodations of the personnel, as well as how they were being provided with food and heating, the ministry noted.

At the end of his visit, Shoigu personally gave the servicemen his New Year’s wishes and thanked them for their exemplary service and efforts in carrying out Russia’s objectives in the operation.