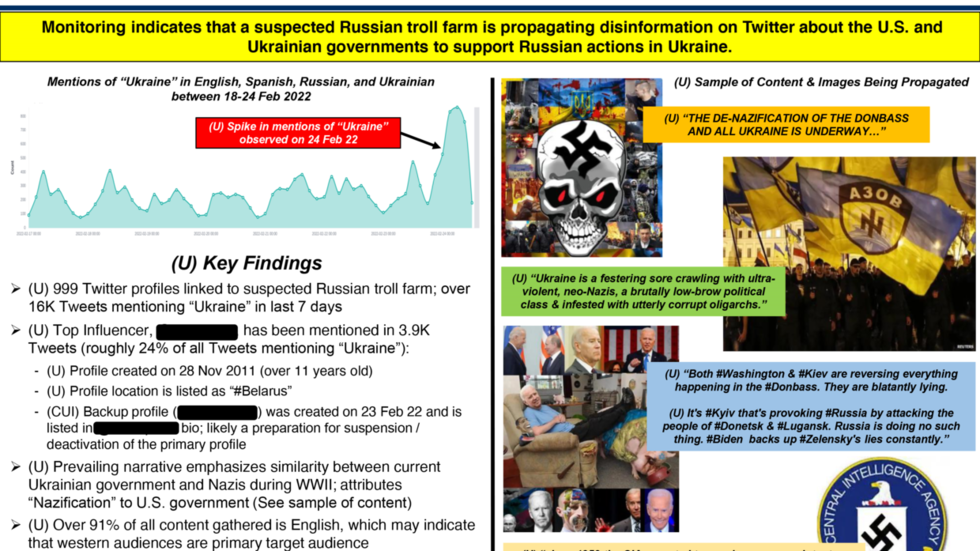 The Pentagon, CIA and other US intelligence and law enforcement agencies were getting increasingly “more aggressive”with their takedown requests, the lastest trove of Twitter documents reveals, effectively pushing the platform to engage in censorship of foreign policy stories that ran against the Washington-approved narrative.

“The files show the FBI acting as doorman to a vast program of social media surveillance and censorship, encompassing agencies across the federal government – from the State Department to the Pentagon to the CIA,” journalist Matt Taibbi wrote in the Christmas Eve edition of the Twitter Files, released with a blessing from the company’s owner Elon Musk.

Among thousands of censorship requests flowing to Twitter from what were termed “OGA” in the documents, or “Other Government Organizations,” through the FBI’s Foreign Influence Task Force, many had nothing to do with purported “foreign meddling” and were linked to purely domestic issues. But when they did, Twitter executives often struggled to validate government claims and were under constant pressure – but were unable to find evidence to blame any foreign actor, Russia in particular.

“Found no links to Russia,” an unnamed analyst said in one of the emails, later suggesting he could “brainstorm” to “find a stronger connection.” Former Trust and Safety chief Yoel Roth admitted he found “no real matches using the info” in another case.

Internal communications show that Twitter had been getting so many requests that its executives lost track and had to improvise a system for prioritizing them. The execs acknowledged it was “odd” how the feds apparently had dedicated personnel tasked with tailoring their takedown requests to Twitter’s policies for faster processing, but even then the company often struggled to find justification for censorship.

“Many people wonder if Internet platforms receive direction from intelligence agencies about moderation of foreign policy news stories. It appears Twitter did, in some cases by way of the FITF/FBI,” Taibi wrote. At least some of these directives originated at the CIA, according to former agent and whistleblower, John Kiriakou, who said he “recognized the formatting.”

The feds sometimes sent massive batches of over 1,000 accounts lined up for “digital execution,” with only a brief explanation of the alleged problems. On multiple occasions they accused “Russian agents” of directing accounts that highlighted “predominantly anti-Ukraine narratives” or documented “purported rights abuses committed by Ukrainians.”

Another intelligence assessment sent to Twitter claimed that accounts spreading information about “neo-Nazis” in Ukraine were part of a Kremlin-controntrolled propaganda campaign and must be banned.

In what Taibi called a “damning admission,” an unnamed former CIA-turned-Twitter executive once noted that the “government partners” were getting increasingly “aggressive” with their takedown requests.

“Due to a lack of technical evidence on our end, I’ve generally left it be, waiting for more evidence,” he said about the InfoBRICS account. He further argued that since “BRICS is an inherently Russia-dominated economic organization” it was “always likely…directed by the Kremlin.”

“Our window on that is closing, given that government partners are becoming more aggressive on attribution and reporting on it…I’m going to go ahead with suspension and marking the domain UNSAFE.”

Spearheaded by Taibbi in cooperation with fellow reporters Bari Weiss, Lee Fang, and several others, the Twitter Files have been published on a rolling basis with the blessing of the site’s new owner, billionaire entrepreneur Elon Musk. To date the documents have shed light on several controversial decisions made by the company, including material surrounding the suspension of ex-President Donald Trump, the practice of shadow banning, as well as a site-wide ban on a New York Post report about the foreign business dealings of Hunter Biden, the son of President Joe Biden.

The files also explained how the US intelligence community worked hand-in-glove with the platform to flag speech for suspension that the US government deemed “misinformation,” and showed how the FBI and Twitter locked horns over the agency’s claims of increased activity by ‘propaganda’ bots, of which Twitter said it found no evidence.