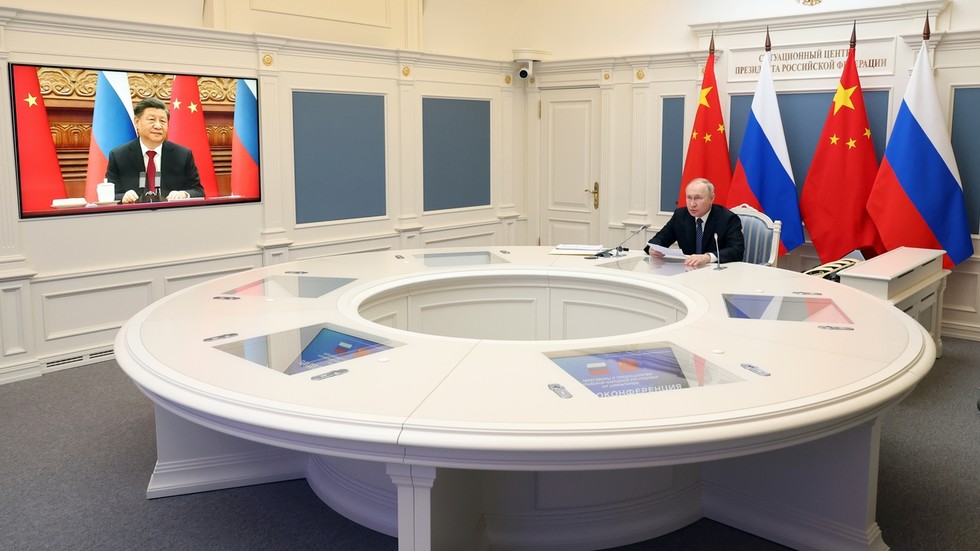 The Russian president has proposed that his Chinese counterpart visit Moscow next year. Vladimir Putin extended the invitation to Xi Jinping during a video call on Friday.

In his initial remarks, Putin noted that he and Xi had regular contacts, both in person and via calls.

“Intensive bilateral exchanges will continue next year. I am certain that you and I will find an opportunity to meet in person. We are expecting you…my dear friend, for a state visit in Moscow in the spring of next year,” he said.

Responding to the Russian president, Xi also called him a friend. He remarked that under their joint leadership “the comprehensive Chinese-Russian partnership and strategic cooperation in a new age demonstrates maturity and resilience to stress.”

Military cooperation is particularly important, he stressed, saying that it “fosters the security of both of our nations and stability in key regions” of the world. He said concerted actions by Moscow and Beijing help create “a just world order based on international law”.

“You and I have similar views on the reasons, progress and the logic of the ongoing transformation of the global geopolitical landscape,” he observed.

Both leaders expressed their satisfaction with the rapid development of relations between the two nations, stating that it benefited the peoples of both China and Russia and helped create a better future for the world.

The US has designated both China and Russia as strategic rivals and accused them of trying to undermine the “rules-based order.” Beijing believes that Washington is trapped in a “Cold War mentality” and that it rejects “win-win cooperation” for geopolitical reasons. Moscow says the US is trying to preserve its hegemonic position in the face of a natural rise of alternative power centers in the modern world.

Putin and Xi met in person twice in 2022. In February, Putin visited Beijing during the Olympic games hosted by the Chinese capital. In September, they both participated in a meeting of the Shanghai Cooperation Organisation in Samarkand, Uzbekistan.