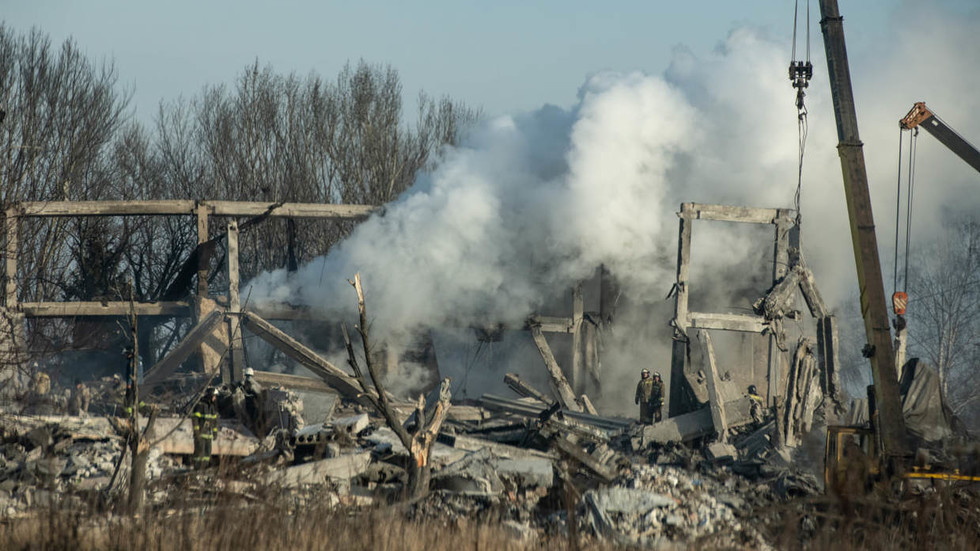 More than 60 Russian troops have been killed in a Ukrainian missile strike, Moscow confirmed on Monday. The attack hit a temporary housing area used by the Russian forces in Donbass.

The facility in the city of Makeyevka in Russia’s Donetsk People’s Republic was targeted by six missiles from US-supplied HIMARS multiple rocket launchers, the Defense ministry said. Two projectiles were intercepted by air defenses, but four made it through, the statement added.

“As a result of a strike by four missiles with high-explosive warheads on a temporary deployment point, 63 Russian servicemen were killed,” Defense Ministry spokesman Lieutenant General Igor Konashenkov said during a briefing.

All necessary assistance and support will be provided to the families of the fallen troops, the ministry assured.

The strike was earlier reported by the Donetsk People’s Republic’s Information Minister Daniil Bezsonov, who said the missiles targeted the building of a vocational school where the troops were stationed. It happened precisely at 0:01 am on New Year’s night, while the serviceman were celebrating, he added.

Russia’s Foreign Ministry earlier condemned Washington for not only supplying sophisticated weapons to Kiev, but also providing the Ukrainian military with intelligence about the location of the Russian forces.

The city of Donetsk as well as other locations across the Donetsk (DPR) and Lugansk (LPR) People’s Republics came under heavy artillery and rocket attacks by Kiev forces overnight, according to local authorities. Officials claim the shelling targeted primarily residential areas and continued into the day, with the Ukrainian military using 155mm NATO-caliber artillery and Western-supplied multiple rocket launchers.

Three people, including a three-months-old boy, were injured as a result of shelling in Donetsk’s central district, the city’s mayor Alexey Kulemzin reported on Sunday.

More than 15 civilians were injured in the attacks on the town of Makeevka, a satellite of Donetsk located immediately to northeast of the city. The town has been repeatedly targeted with various weaponry over the past 24-hour period, according to local authorities.

At least six civilians were killed in the Ukrainian attack on a hospital, located at the town of Pervomaysk in the LPR. Deputy head physician of the hospital, Tatyana Kovalyeva, told RIA Novosti the facility was targeted with rocket salvos three times, with intervals of some 30 minutes, in an apparent ‘double-tap’ effort to strike the hospital itself and then first responders.

At least six people have been killed, and the figure may grow as we’re still searching through debris,” Kovalyeva stated.

The cities of Donbass have been repeatedly subjected to heavy artillery and rocket attacks by Kiev troops amid the conflict between Russia and Ukraine, with more than 1,000 civilians perishing last year in the DPR alone.

Both sides of the ongoing conflict have apparently been very active amid the New Year’s Eve celebrations. While Kiev troops shelled settlements across Donbass, the Russian military launched a new large-scale missile barrage across Ukraine.

The Russian Defense Ministry said on Sunday it had targeted drone manufacturing facilities and stockpiles during the latest salvo, disrupting Kiev’s plans to carry out “terrorist attacks” against Russia.