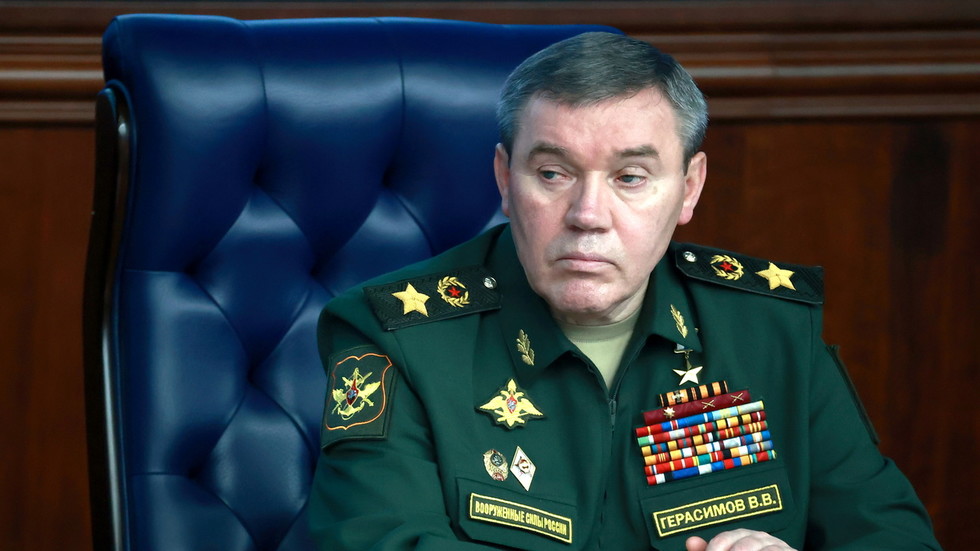 Russian Chief of General Staff appointed as commander of forces in the Donbass due to increasing operational scale and complex co-ordination of ground, air and naval fires in the special military operation

The head of the Russian General Staff, Army General Valery Gerasimov, has been appointed to lead Moscow’s joint forces group in Ukraine, the defense ministry said in a statement on Wednesday. The former commander of the military operation, Army General Sergey Surovikin, has been made his deputy.

The need to “raise the operation command level” was linked to an “increased scale of the combat missions,” and the need for closer coordination between various services and branches of the armed forces, the ministry said.

The move will also improve logistics support and command effectiveness for the Russian forces in Ukraine, it added.

It comes just around three months after the defense ministry appointed Surovikin, the Russian Air Force commander, to lead the effort.

Gerasimov is known as one of Russia’s top military commanders and a renowned strategist, who has earned the respect of Kiev’s top commander, Valery Zaluzhny. Back in September, Zaluzhny told Time that he had “learned from Gerasimov.”

“I read everything he ever wrote… He is the smartest of men, and my expectations of him were enormous,” the Ukrainian general admitted at that time.

Gerasimov has visited troops fighting in Ukraine on several occasions to improve coordination between the forces, but did not take over direct operational command until now. In December, Kiev admitted trying to kill Gerasimov during one of his unannounced visits back in April 2022, despite the US objections.

Previously, the New York Times reported that Ukrainian forces had shelled the positions where Gerasimov was thought to have been, but the general was unaffected by the strikes. Moscow never officially confirmed that the general even visited troops at that time.

In the West, Gerasimov is alleged to have been the author of the “Gerasimov doctrine.” This term was coined in 2013 by writer and ‘Russia watcher’, Mark Galeotti, and overhyped by Western media as a unique Russian hybrid warfare system, combining military and non-military methods. Moscow never confirmed the existence of any such doctrine. Gerasimov himself, however, said back in 2019 that it was the West that was using “hybrid warfare” methods against Russia.

Two other generals were also appointed as Gerasimov’s deputies in the ongoing military campaign in Ukraine. One of them is the Russian Ground Forces commander, Army General Oleg Salyukov. An experienced career officer, he served as a battalion commander and head of the Far-East Military District before becoming a deputy head of the General Staff and then Ground Forces commander.

The other is Colonel General Aleksey Kim, a deputy head of the General Staff. He previously headed Russia’s Combined Arms Academy of the Armed Forces and is known as an experienced military specialist. He is also a professor and holds an academic degree in military sciences.