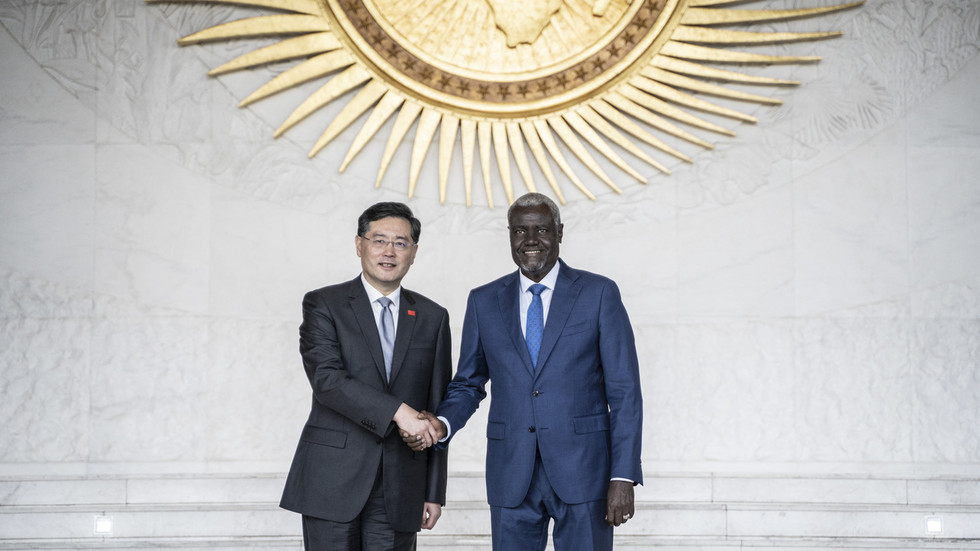 Promoting Beijing’s investment in African development and modernization during his first foreign trip, China’s new foreign minister Qin Gang said on Wednesday that the continent should not become a battleground for rival world powers.

Qin began a five-country tour in Ethiopia on Wednesday, opening the new headquarters of the African Center for Disease Control (CDC), built by Chinese engineers. While in Addis Ababa, he met with the Ethiopian leadership and visited the African Union headquarters. He is scheduled to visit Egypt, Angola, Benin, and Gabon before returning to China.

“Africa should be a big stage for international cooperation, not an arena for competition between major countries,” Qin said at a press conference with AU Commission chair Moussa Faki.

A former Chinese ambassador to the US, Qin became foreign minister last month. He continued the tradition making Africa the first foreign destination of his tenure, which he noted has continued for 33 years without interruption.

Speaking at the opening of the Africa CDC, he outlined Beijing’s vision for relations with Africa, saying the two will always have a shared future “no matter how the international environment changes.”

“Today, our world, our times and history are changing in ways like never before. The collective rise of developing countries is irreversible,” Qin said, adding that China and Africa should “oppose hegemony, bullying, highhandedness and racial discrimination, and jointly safeguard true multilateralism and promote greater democracy in international relations.”

Qin insisted that Beijing’s policy was based on the principles of “sincerity, real results, amity and good faith, and of pursuing the greater good and shared interests.”

China “makes no empty promises, still less presses others against their own will,” he said in the speech at the Africa CDC. “When it is handed over to our African friends, the Africa CDC headquarters will be wholly run and managed by the AU without any interference from China.”

The US and its European allies – many of whom used to be colonial powers in Africa – have long accused China of practicing “debt trap” diplomacy. After the meeting with Ethiopian PM Abiy Ahmed, Qin announced that China would be writing off a portion of Addis Ababa’s debt.

Last year, Beijing forgave 23 loans to 17 African countries. Ethiopia has borrowed almost $14 billion from China since 2000, and has sought relief since 2021, citing the devastation caused by the conflict in Tigray.