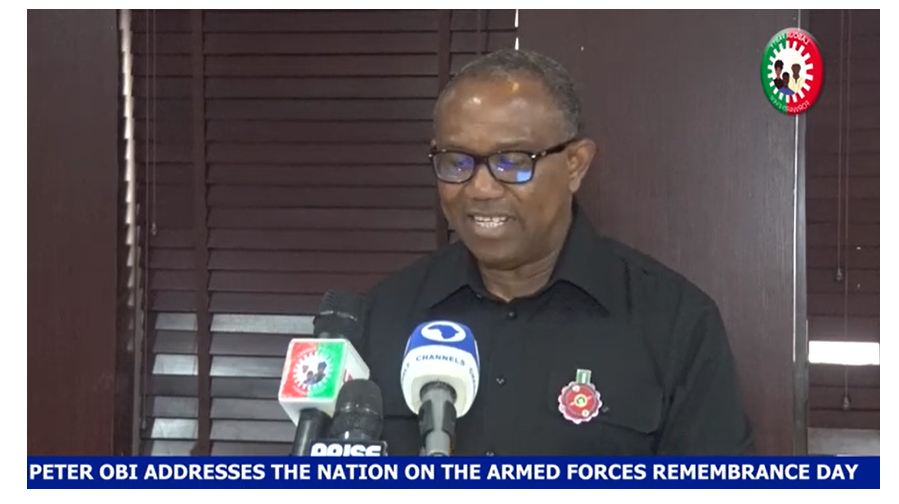 The Labour Party (LP) presidential candidate Peter Obi has promised to sit down with agitators who were clamouring for the break up of the federation. He made the remarks in a speech marking the 2023 edition of the Nigerian Armed Forces Remembrance Day, Sunday.

“Fellow Nigerians..15th January, a very special and unique day in 2023 as it was 53 years ago! 40 days from today, Nigerians will be voting in an election that many regard as the most crucial and existential decision we have to make as a nation. and particularly for our children and youths, given the sad state of our dear nation, Nigeria: alarming insecurity, unemployment, poverty, inflation, debt, hunger, disunity, hopelessness and many other indices of a failing state.” Obi stated.

Nigeria was no different 53 years ago when the articles of surrender were signed by Biafra the south eastern region that broke away after millions of Igbos were killed in the northern region following a bloody coup led by an Igbo officer on January 15 1966. On January 15 1970, the civil war that consumed millions of lives and destroyed countless properties ended.

Taking a swipe at the frail health of the two other contestants in the election next month, Obi said it was the mental and physical fitness of Nigerian post civil war leaders like Generals Gowon and Obasanjo that made the statement of “no victor, no vanquished” a reality by securing a united , peaceful and indivisible Nigeria that saw the emergence of President Shehu Shagari and Dr Alex Ekwueme who became the first executive vice president from the defunct Biafra less than ten years after Biafra was defeated a period that marked a great economic boom.

“I am most truthfully and wholly committed to that stand of One United, Secure and Progressive Nigeria! It is also worth calling a spade a spade. There are youths all over Nigeria who are frustrated because of injustice, poverty, lack of opportunities, unemployment,and apparent exclusion. Such youths could seize upon and use anything issue or tool to express their frustration and anger. I believe that some of those who are agitating, are doing so partly due to our failures in creating an inclusive and progressive Nigeria.” Obi added.

He said if he was elected he will sit with agitators using the carrot and stick approach. “I have repeatedly said that I will sit down and discuss with all agitators, believing that we must continue to talk and negotiate with all to achieve positive results.”

“I personally believe that the best strategy for dealing with these situations manifesting in the guise of unclear nationalism, bigoted patriotism and religious bigotry is a carrot and stick approach. Nation building and an Ordered Society are now imperative.”

He elaborated that militant groups will be offered a national amnesty and if that fails the stick approach will be applied with justice tempered by mercy.

A firm believer in the unlimited potential of every Nigerian he said agitation will drop with the election of positive leadership.

“I believe that various agitation groups will stop their agitations when they see a patriotic leadership imbued with fairness, equity, justice, and a determination for a very inclusive and progressive society.” He stressed.

Obi, 61, from the south east region which is being torn apart by the Indigenous Peoples of Biafra (IPOB) and the Eastern Security Network (ESN) solemnly pledged to build an all-inclusive and progressive society where no individual or group will be estranged, marginalised, or excluded.