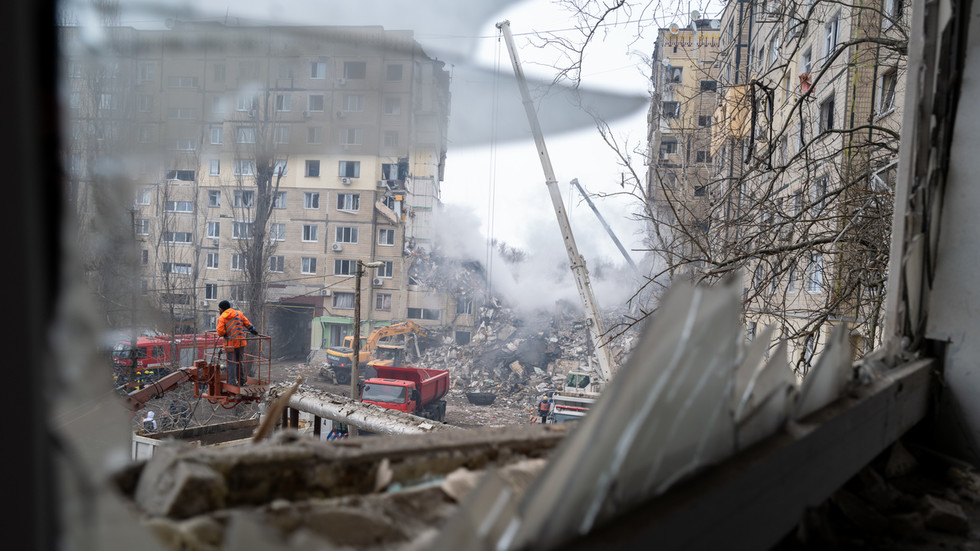 The Russian Defense Ministry has said that the latest missile strikes against Ukraine on Saturday hit “all assigned targets.” Earlier, Kiev’s officials reported that the country’s power grid had been damaged in several regions on the same day.

“On January 14, 2023, a missile attack was carried out on the military command and control system of Ukraine and associated energy facilities. All assigned targets have been hit. The objectives have been reached,” the military said in its statement on Sunday.

Multiple strikes were reported by Ukrainian officials and media outlets on Saturday, with Energy Minister German Galushchenko claiming Russian missiles made it through to multiple energy infrastructure sites across the country. Ukraine’s largest private energy operator, DTEK, said that two of its thermal power stations came under attack. Footage circulating online suggests at least one of the facilities sustained heavy damage, with its main machinery hall destroyed.

A residential building was heavily damaged amid the strikes in the southeastern Ukrainian city of Dnepr (previously known as Dnepropetrovsk), according to videos published on social media. Ukrainian President Vladimir Zelensky said that some 25 civilians were killed and 73 were injured. Kiev officials have laid the blame on Moscow, but given differing accounts about what transpired.

Aleksey Arestovich, a senior adviser to President Vladimir Zelensky said a Russian missile that fell on an apartment block in the eastern Ukrainian city of Dnepr on Saturday had been shot down by Kiev’s forces,

Asked if the air defense forces in Dnepr had the opportunity to intercept the incoming missile, Arestovich stated: “It was shot down. It apparently fell on the [apartment] block. But it exploded when falling.”

Arestovich later wrote on Facebook that Russia was ultimately responsible for the deaths. “Everybody understands perfectly that the tragedy would not have happened if it was not for the Russian strike.”

“Nobody will blame Ukraine. Just like it was not blamed when our air defense missile fell in Poland, killing two Polish citizens,” Arestovich added, referring to an incident that occurred last fall.

On November 15, a missile killed two people in the Polish village of Przewodow near the Ukrainian border. Polish officials said at the time that the projectile was most likely fired by Ukrainian forces that were trying to fend off a Russian attack. President Zelensky initially claimed that Poland was “struck by Russian missiles,” but later stated that further investigation was needed to determine what happened.

Russia has denied targeting civilians in past statements.

Moscow drastically ramped up its strikes on Ukrainian infrastructure in early October of last year, blaming Kiev for repeated acts of sabotage on Russian soil, including the bombing of the strategic Crimean Bridge.