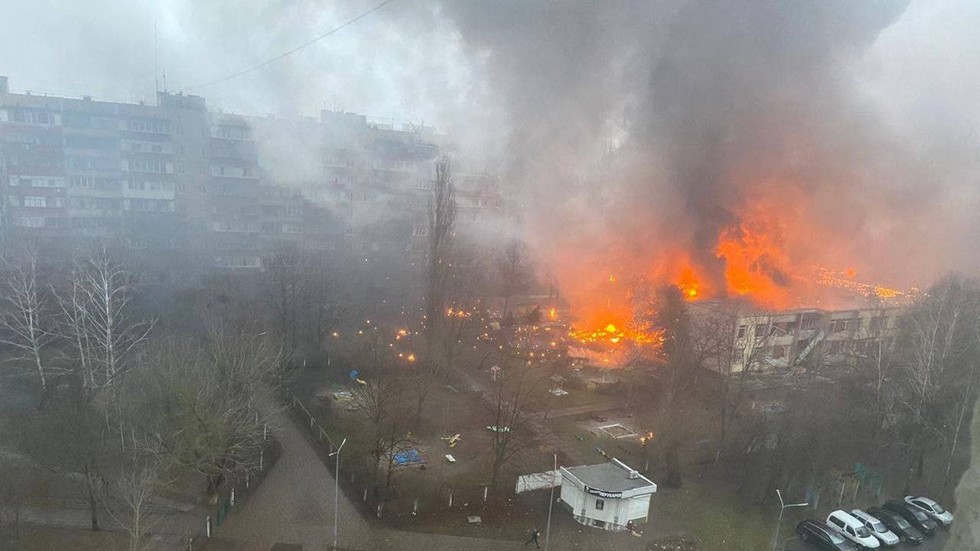 Ukrainian Interior Minister Denis Monastyrsky has been killed, police confirmed on Wednesday, after a helicopter he was traveling in crashed in a residential area in the town of Brovary near Kiev.

At least 18 others, including three children, also lost their lives in the incident, the head of Kiev Region’s Military Administration, Aleksey Kuleba, wrote on Telegram.

Another 22 persons, including ten children, were injured and rushed to hospital, according to Kuleba.

Nine of those killed were aboard the helicopter, which was transporting Monastyrsky, his deputy Evgeny Yenin and other high-ranking Interior Ministry officials, according to the head of Ukraine’s National Police Igor Klimenko. The ill-fated aircraft belonged to the Ukrainian Emergencies Ministry, he added.

The helicopter crashed near a kindergarten and an apartment block in Brovary, a town of around 110,000 people, located about eight kilometers northeast of Kiev.

Firefighters were deployed on site as a major blaze broke out after the crash, ravaging the preschool complex.

The Interior Ministry said it’s looking into several possible reasons for the crash, including malfunction of equipment, violation of security rules and sabotage.

A spokesperson for Ukraine’s Air Force pointed out that investigation of the incident is going to take at least few weeks and that it was too early to speak about what caused it. He also said that the crashed helicopter was French-made.

Monastyrsky, 42, has been Ukraine’s Interior Minister since August 2019. During the presidential election campaign earlier that year, the former lawyer had been presented as an expert on law enforcement reform in Vladimir Zelensky’s team.

Meanwhile a high-profile adviser to President Vladimir Zelensky has tendered his resignation, having admitted live on air that Ukrainian forces had shot down a Russian missile over the city of Dnepr before it reportedly landed on an apartment block, killing dozens. The remark has landed Aleksey Arestovich in hot water, as commenters claimed he was blaming the Ukrainian military for the deaths.

Arestovich shared his handwritten letter of resignation, addressed to Andrey Yermak, Zelensky’s chief-of-staff, on Tuesday morning. He claimed he was showing “an example of civilized behavior” by leaving his position in the Ukrainian government. Later in the day, Zelensky’s office confirmed that Arestovich’s request had been accepted.

The presidential aide previously described his remark as “a serious mistake, made during a live broadcast.”

“The level of hate directed at me is incomparable with the consequences of the on-air mistake,” Arestovich said. He offered apologies to those “deeply hurt” by his words, but not “to the people who are spinning this issue.”

Ukrainian officials reported on Tuesday that the incident in Dnepr claimed at least 40 lives and injured 79 people, while 25 were listed as missing. The Russian Defense Ministry said it was targeting military sites and elements of Ukraine’s energy infrastructure during the Saturday barrage. The Kremlin blamed Kiev for the deaths of civilians, with spokesman Dmitry Peskov stating that “this tragedy was the result of the actions of the air defense missiles.”

Yermak appointed Arestovich as a freelance aide in early 2020, which boosted his profile as a frequent commenter on all things related to the conflict with Russia. For years before that he had been a popular figure with Ukrainian media outlets.

The veracity of his own messages was called into question by Arestovich himself. In December 2017, he came out as a self-described propagandist, who had “lied a lot” since 2014 to boost the morale of Ukrainians and damage the image of Russia.

Arestovich’s resignation may signal the launch of a political career, Russian political expert Marat Bashirov suggested on his Telegram feed. Zelensky’s office may find it “difficult to shut him up,” he suggested, alleging that Arestovich has patrons among the British intelligence fold. But he may also face violence from radical nationalists with a wish to “take revenge,” Bashirov predicted.