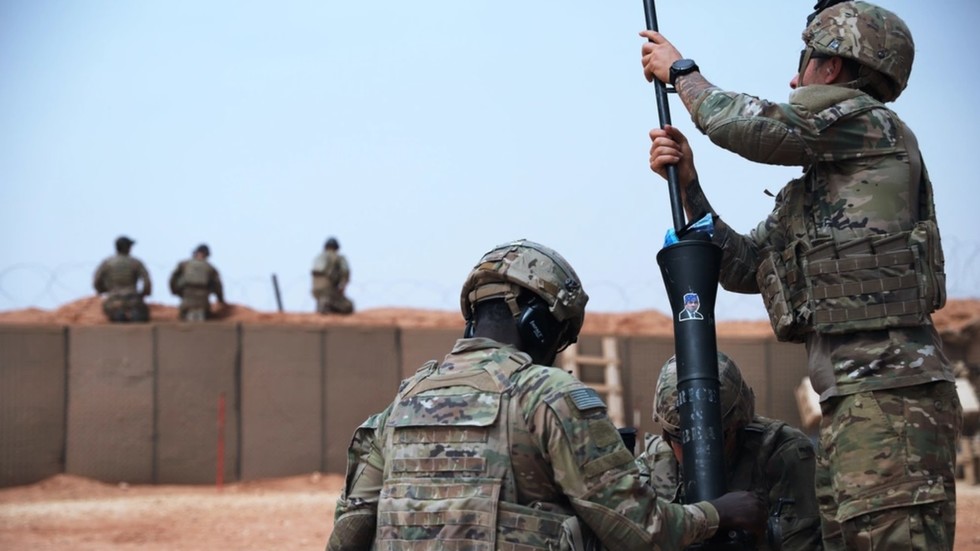 Several explosives-laden drones have targeted an American military base in southern Syria, with one successfully hitting the compound, according to US Central Command. Washington keeps just shy of 1,000 soldiers in the Middle Eastern nation, despite repeated demands from Damascus for them to withdraw.

CENTCOM said the attack involved three ‘suicide drones’ and occurred on Friday morning at the US garrison in Al-Tanf, Syria, where American forces have long been stationed alongside militia fighters who previously sought to overthrow the Syrian government.

“Two of the drones were shot down by Coalition Forces while one struck the compound, injuring two members of the Syrian Free Army partner force who received medical treatment. No US forces were injured,” the military said, adding that such strikes are “unacceptable” as they “place our troops and our partners at risk and jeopardize the fight against ISIS.”

Situated near the three-way border junction with Iraq and Syria, the Al-Tanf outpost was established by US troops in 2016. They soon embedded with a rebel faction then known as Maghaweir al-Thowra (Commandos of the Revolution), which has since rebranded as the Syrian Free Army (distinct from the former Free Syrian Army).

While Washington maintains that the “vetted opposition” group is meant to combat Islamic State (IS, formerly ISIS) terrorists and has abandoned its aims to oust Syrian President Bashar Assad, it has faced controversy in recent months amid allegations of corruption and drug trafficking by its members. In September, the US-led coalition was forced to sack the group’s commander, with the military saying the move “occurred to ensure the long-term success” of the militia.

The Al-Tanf garrison has come under similar drone attacks on several occasions over the years, with sporadic strikes by unidentified actors. Last summer, Russian forces – who continue to support the government in Damascus – conducted several airstrikes in the area against a group of “US-trained and equipped” militants who purportedly “had committed terrorist acts and killed civilians.”

In addition to 200 US soldiers based at Al-Tanf, around 700 operate elsewhere in Syria, most in the country’s oil-rich northeast, where they have allied with Kurdish fighters. The Syrian government has repeatedly declared Washington’s military presence illegal, and continues to accuse US forces of stealing vast amounts of the country’s energy resources.

Last Tuesday, China has blasted the United States for its “banditry” in Syria, claiming that Washington’s years-long military occupation and the “plundering” of Syrian resources have placed the country on the brink of a “humanitarian disaster.”

Addressing reporters during a press briefing on Tuesday, Chinese Foreign Ministry spokesman Wang Wenbin was asked to comment on recent reports in Syrian media that US forces had transported a large quantity of “looted oil” from Syria to Iraq earlier this month.

“We are struck by the blatancy and egregiousness of the US’s plundering of Syria… Such banditry is aggravating the energy crisis and humanitarian disaster in Syria,” he said, citing Syrian government statistics purporting that “over 80% of Syria’s daily oil output was smuggled out of the country by US occupation troops” in the first half of 2022. “Whether the US gives or takes, it plunges other countries into turmoil and disaster, and the US gets to reap the benefits for its hegemony and other interests,” he added. “This is the result of the US’s so-called “rules-based order.””