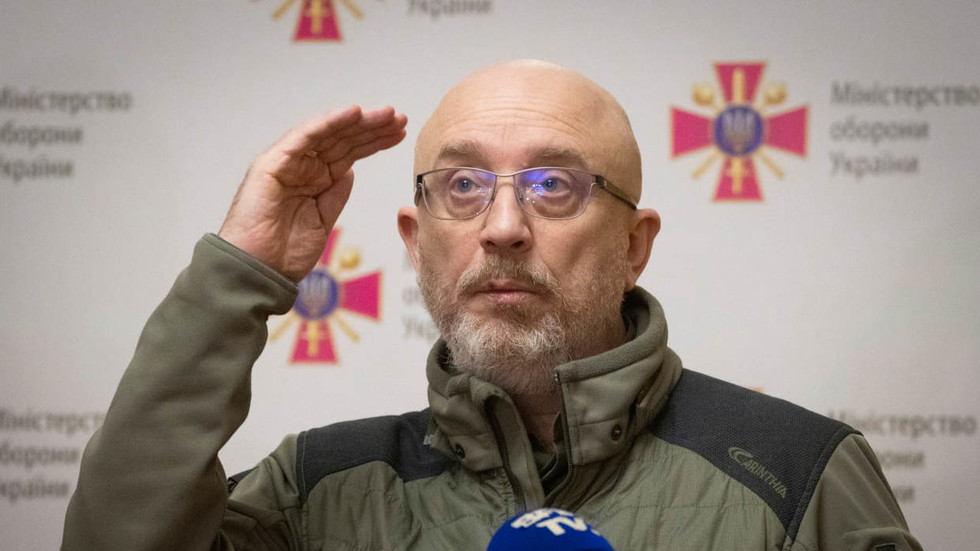 Kiev is shedding blood to carry out the mission NATO set for itself and expects the “civilized West” to provide weapons and ammunition in return, Ukrainian Defense Minister Aleksey Reznikov has said in an interview for a domestic TV channel.

Appearing on the 1+1 network’s TSN channel on Thursday evening, Reznikov pointed out that at the Madrid summit last summer, NATO declared Russia the greatest threat to the US-led bloc.

“Today, Ukraine is addressing that threat. We’re carrying out NATO’s mission today, without shedding their blood. We shed our blood, so we expect them to provide weapons,” he said.

Reznikov also claimed that his NATO colleagues have told him, both in conversations and via text messages, that Ukraine is the “shield of civilization” and “defending the entire civilized world, the entire West.”

Ukrainian officials, from President Vladimir Zelensky down, routinely make public appeals for tanks, missiles, artillery and ammunition. Russian Defense Minister Sergey Shoigu told the General Staff in December that Moscow was de facto fighting the collective West. By his estimates, the government in Kiev has received almost $100 billion worth of weapons, ammunition and other supplies in 2022 alone.

Former US Secretary of State Condoleezza Rice and former Defense Secretary Robert Gates have admitted that Ukraine’s economy and military are almost completely reliant on bailouts from the West, and barring a dramatic turnaround, its chances of victory are slipping away.

Ukraine’s “economy is in a shambles,” the ex-diplomat and former Pentagon chief wrote in the Washington Post on Saturday.

The country’s “military capability and economy are now dependent almost entirely on lifelines from the West,” they continued, arguing that should Ukraine fail to mount a successful offensive in the near future, President Vladimir Zelensky will be pressured by the West to negotiate a ceasefire with Russian President Vladimir Putin – something the Ukrainian leader has repeatedly refused to consider.

A Russian servicemen speaks over walkie-talkie near a BM-21 Grad multiple launch rocket system in the course of Russia’s military operation in Ukraine, at the unknown location. ©  Sputnik/Konstantin Mihalchevskiy

With the frontline relatively static since autumn, Russian forces have ground down their Ukrainian opponents in fierce fighting near Bakhmut/Artyomovsk, with an American mercenary commander recently acknowledging that Ukraine is suffering “extraordinarily high casualties” in that sector, and Ukraine’s ambassador to Canada, Vadim Pristaiko, describing his side’s casualties as “huge” and “indigestible.”

Kiev has publicly proclaimed that it plans a major offensive in the spring, but Rice and Gates wrote that Ukraine may have “weeks, not months” to stay in the fight.

To that end, they advocated sending the country more and heavier weapons. Although the US has already allocated more than $110 billion in military and economic aid to Ukraine since February, they said that Washington won’t send heavy tanks. Germany “and other allies” should fill this need instead, they argued.

On Friday Washington announced the delivery of 50 Bradley infantry fighting vehicles, the most modern armor sent to Kiev so far, as part of a $3 billion weapons package. Earlier this week, France pledged a number of wheeled ‘light tanks’as well.

These shipments are intended to replace Ukraine’s battlefield losses. Last month, Kiev’s top general Valery Zaluzhny told The Economist he would need 300 more tanks, up to 700 infantry fighting vehicles, and 500 howitzers to conduct offensive operations. This is more than the number of such vehicles in British or German inventory.

Moscow insists that Western weapon deliveries only serve to prolong the conflict, and has repeatedly warned Ukraine’s backers that this could result in an all-out military confrontation between Russia and NATO.

Russian troops are observing a 36-hour Orthodox Christmas truce despite attacks by Ukrainian forces, the country’s Defense Ministry has confirmed. The statement came after Kiev rejected Moscow’s declaration of a unilateral ceasefire, due to expire at midnight on Saturday.

The ministry said during its daily press briefing on Saturday that its troops “have been observing the ceasefire across all of the combat contact line.”

“At the same time, the Kiev authorities have fired artillery at cities and the Russian positions,” the ministry said. It added that Ukrainian soldiers have shelled multiple areas in Donbass and Russia’s newly incorporated territories in the south, and that the Russian military opened fire in response to Ukrainian attacks on several occasions.

Ukrainian forces fired more than 60 large-caliber shells at Donetsk and hit the nearby city of Makeyevka with US-supplied HIMARS multiple rocket launchers, according to the Russian Defense Ministry.

Officials in the Donetsk People’s Republic said two people were wounded and several apartment blocks and private houses were damaged on Saturday. A Ukrainian drone was destroyed near the port of Sevastopol in Crimea, according to Governor Mikhail Razvozhayev. Sevastopol houses Russia’s Black Sea Fleet.