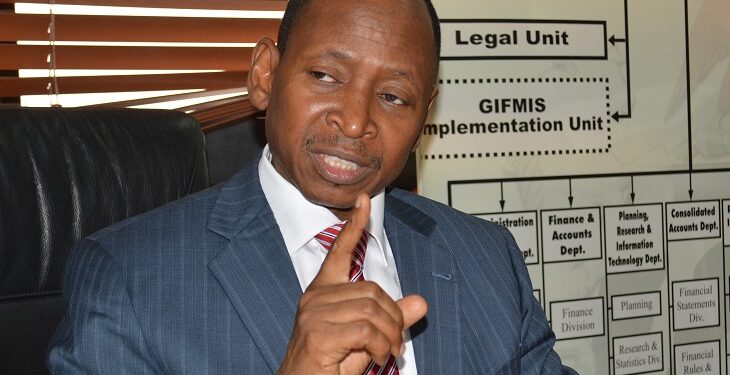 Nigeria’s accountant-general Ahmed Idris was arrested by the Economic and Financial Crimes Commission (EFCC) on Monday after failing to report to the anti-graft agency over allegations he diverted public funds and laundered money to the tune of N80 billion.

EFCC detectives arrested him at the Aminu Kano International Airport Kano on his way to Dubai. He was handcuffed and flown on a Federal Government chartered aircraft back to Abuja the federal capital, where he will be detained and questioned by the agency before being charged to court. Sources say his family and business associates were in involved in the scam to defraud the Government of Nigeria.

EFCC in a tweet said. “Operatives of the EFCC on Monday, May 16, 2022 arrested serving Accountant General of the Federation, Mr. Ahmed Idris in connection with diversion of funds and money laundering activities to the tune of N80billion (Eighty Billion Naira) only. The Commission’s verified intelligence showed that the AGF raked off the funds through bogus consultancies and other illegal activities using proxies, family members and close associates.”

In 2021, The Socio-Economic Rights and Accountability Project (SERAP) urged President Muhammadu Buhari to “direct the Attorney General of the Federation and Minister of Justice Mr Abubakar Malami, SAN, and appropriate anti-corruption agencies to investigate allegations that N106 billion of public funds are missing from 149 ministries, departments and agencies (MDAs), as documented in the 2018 annual audited report by the Auditor-General of the Federation.” That same year he was accused by the Academic Staff Union of Universities(ASUU) of fraud by insisting that lecturers enroll on the Intergrated Payroll and Personnel System where he will gain N16,000 on each successful enrolment.

Idris, 62, from Kano State was appointed by President Muhammadu Buhari in 2015.